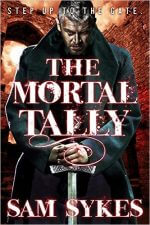 I don’t typically re-read books. Aside from the fact that I just don’t have the time for it–too much new stuff to read all the time–I rarely come across a novel that calls me back loudly enough to hear it over the call of all that new stuff. While reading this novel though, I found that the voice wanting me to re-read the earlier books in this series was rising, because of just how much the story is now beginning to open up, and I’m wanting to go back and see what I’ve missed by not understanding just how large the story and the world that Sykes is building here actually is. As such, this is absolutely not a fantasy novel to miss.

THE MORTAL TALLY (Amazon) is Sam Sykes’s fifth novel, but the second since beginning the Bring Down Heaven series with Orbit. The difference between the first trilogy, which he published with Pyr, and this next set of books–however long it may end up being–is rather quite large. We usually give content ratings here at EBR, and between the two series each of the three content levels we give jumped up a thousand and ten percent. My review for THE CITY STAINED RED (EBR Review) got my vote as a “Book for Boys” and this is another one of those. Everything here is ramped up to eleven.

The story picks up a handful of days after the end of CITY. If you’ll remember, our band of adventurers have been split up in the extreme. Coming into the city of Cier’Djaal, they wanted only to find Miron Evenhands and get paid for their contract work, but things didn’t quite work out for them. Denaos got pulled back into his old pack of thieves. Asper found herself in the Temple of Talanas, her god, helping protect the citizens of the city. Dreadaelon had found a beautiful “woman of the night” and lost himself in the ecstasy of a drug-induced haze while avoiding legal ramifications being served up by the Venarium. Kataria wandered into Shicttown, and Lenk got himself into a whole lot of trouble whilst trying to find Miron. Leaving Gariath pissed off that everyone was leaving without him.

Each of these stories continues in this second installment of the story and in doing so, Sykes begins to build another of the powder kegs that are floating in the veritable sea of powder kegs that is this world of his. Early on Lenk leaves the city with the demigod he has just found himself being haunted by. Driven out by the events culminating in the final battle of the last book. He and Kataria have been hired to hunt for the long-lost demesne of the very man haunting Lenk in hopes of putting down an effort to bring him back into the world. This is very much the main story line in my mind. At least it was the one that pulled the most at my interest, as it was the part of the story that moved forward the world-building that Sykes is only now beginning to unravel. The conversation between the demigod (Aeon) Khoth-Kapira and Lenk was great, and led naturally into the events at the climax, which was massive. Just… massive.

THE MORTAL TALLY picks up a handful of days after the end of the previous book with our band of adventurers split up. Their stories continue.

The story lines of each of the other characters were, as usual, spot on for each of them in terms of what we’ve learned in previous books, but also enlightening as each of them leans more about who they are, what they believe, and just what exactly is happening to the world surrounding them. Kataria eventually finds the shicts, and gets embroiled in their “politics” of war. Denaos finds both friends and enemies within the ranks of thieves surrounding him. Asper fights not only the growing tide of dead and dying in the war-ravaged roads of Cier’Djaal but a new growing religion and its connection to the reigning merchant Fashas of the city and how it impacts her own faith. Oh, and the demon that is living in her arm. Dreadaeleon continues to defy his masters in the Vanadium with his newly-found power and control over the Venarie (magic). And Gariath finds yet another way to bring even more violence to a region of the world completely inundated with it.

Each of the characters’ stories are unique and engaging. Hilarious, fast-paced, and full of plot-driving action, Sam Sykes has brought together some of the best aspects of so many others into a single, satisfying, brilliant epic that has completely won me over. The intensely personal characters of GRRM. The gritty violence and pervasively sarcastic humor of Abercrombie. The Sanderson-avalanche feel of the entire novel. Beasts and creatures on the level of Playstation’s God of War. I just can’t get enough. It’s big and it’s bold and it’s fun like nothing else I’ve ever read.

After finishing this, it has become perfectly clear to me just how much real estate there is in this world. There is buried history and boiling hatred everywhere. Conflict galore. Can’t wait for the next installment: GOD’S LAST BREATH. Even that title. Can you say epic? Awwwww yeah! Bring it on!