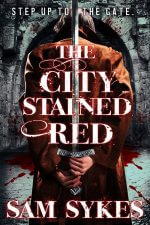 There’s something wrong with the world. Don’t you think? There’s so much garbage out there that could just be better. Like more sword fights would be nice. And massive dragonmen with bad tempers. And belly-grown demons that rip their way up through your gullet and out your mouth. And… and… and… ah, who am I kidding? What would a world like that be like? Mass chaos, I tell you. Mass chaos. And I know it all too well. For I have read it, and that world is the brilliance of Sam Sykes.

THE CITY STAINED RED (Amazon) is Sam Sykes’s fourth book, the fourth written in his fantasy world, and yet could easily be an entry point for anyone to his books. Lenk and his fellow adventurers (Kataria the Schict, Gariath the Dragonman, Denaos the rogue, Asper the priestess, and Dreadaleon the wizard) arrive at the port city of Cier’Djaal, trading nexus and the heart of silk production for the known world. After their adventures detailed in the previous three books, they’ve come to port to collect the payment they’ve been promised by the priest Miron Evenhands. Unfortunately, as soon as they debark, Miron gives them the slip and disappears into the city, leaving them to find their own way while they search for him. This is a city for which several of our characters have history. Some impressively so. I remember really enjoying Denaos’s backstory and we get to see some more of it here.

This book has a very similar feel to the author’s first trilogy. That means it’s freaking brilliant awesome-sauce. Yes, it moves crazy fast. Yes, there are TONS of fights. Yes, the whole thing happens in a single city. (Come on, give the guy a break. His debut novel all happened on A SINGLE BOAT. So at least he’s giving us some more elbow room this time around…) There’s in-fighting and out-fighting and creatures and gods and magic and blood and violence and gore and like I said… MASS CHAOS! This is such a boy book. We have reviewed lots of “Books for Chicks” here at EBR. Well, welcome to “Books for Boys”. It’s all the crazy, fancy fun of an entire series coming to a head, only without all of the sloppy, boring, take-forever build up we find in so many epic fantasy tomes today.

I think in my last review I referred to Sykes’s books as anti-literary, because whereas most literary books build themselves up toward asking a question well and then ignoring the fact that readers might just want an answer, Sam Sykes’s books smash you in the face while forgetting the asking part and just answers a question well. That question being: How much intensity, imagination, and dismemberment can I throw into a book and still make everything feel believable and freaking AWESOME?

Sam Sykes is a genius. Hilarious, fast-paced, character-centric, true-to-character (a-la Joss Whedon), ridiculously inventive, and brilliant at writing both emotion and action. This series was never a trilogy, and oh am I thankful. This is still a direct continuation of the story he was telling in the first three books; although, like I mentioned above, new readers could easily jump in here. I saw a couple improvements in this novel, over those previous. Clarity is a little better this time around – it’s more obvious what is happening and why–-and the means by which we learn everything is masterfully done. There is information. Lots more this time around, actually. It doesn’t feel like information though. It feels like story. Hallelujah.

THE CITY STAINED RED is Sam Sykes's fourth book, the fourth written in his fantasy world, and yet could easily be an entry point for anyone to his books.

I did miss one thing in this book, and that was a big slam-bang finish. Although there was a very large fight at the end, essentially all of our main characters were, sadly, avoiding it. So, I missed some of the fancy-fun chaos I’d been expecting. Still, there was a whole boat-load of action that had come before, so I can’t really be too upset about that. If you’re tired of slow-moving, over-written, exposition-fraught European-church-door stoppers (going for the visual of LARGE with that last one), look no further. This author is your man. This book is your… er, book. Buy it now and make the dude filthy rich so he’ll never want to do anything other than write great books for us to read. And review. And fill our shelves with.

Oh, and did I mention? Last I checked, the Kindle edition cost a whopping $1.99. Some marketing scheme to get lots of new readers now that he’s at a new publisher would be my bet. Their loss. Our gain. Don’t wait.