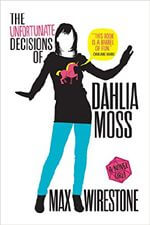 Our heroine’s life is currently a sad state of affairs. She’s been unemployed for a year, living off the generosity of a roommate who doesn’t demand rent. Her boyfriend cheated on her with his dental hygenist. And now Dahlia’s bank account is so depleted she’s even considering accepting a job as a private detective–and is hired to discover who stole the Bejeweld Spear of Infinite Piercing from an MMORPG character’s account.

It sounds like an easy $2000. A fool and his money are easily parted and all that. Alas, it doesn’t turn out so simply, especially when said fool Jonah turns up dead.

With the death of her client, Dahlia’s objectives may have changed, but her original plan to join Jonah’s guild on the hardcore MMO Kingdoms of Zoth and learn who the thief is hasn’t changed. Now it isn’t only about recovering the spear, but finding out if one of his guildies–all of whom knew him in real life–killed him.

The story launches from page one, and moves along quickly as Dahlia muddles through a job she’s definitely not qualified for–other than she seems to love interrogating people and doesn’t seem to be afraid to do strange things to get the answers she needs. Wirestone sets up the story well, giving us enough clues to keep us guessing, and wrapping up the story satisfactorily.

Wirestone’s characters are fun to read, as well. Sometimes they can get a little one-note (Dahlia’s potential new boyfriend) or over-the-top (such as Dahlia’s bizarre roommate), but with a title like THE UNFORTUNATE DECISIONS OF DAHLIA MOSS (Amazon) it’s not exactly realism. Dahlia’s observations are hilarious as she navigates the strange people Jonah has surrounded himself with. Sometimes I got lost as to who was who, but that’s not unusual with a laundry list of mystery suspects. In books like this the witty dialogue could have made the characters all sound the same, but fortunately Wirestone has a handle on who his characters really are and it’s easy to tell by what they say. Dahlia’s dialogue in particular is hilarious to read, because she is well aware of her own failings, and it flavors her detective style. But despite recognizing the failings in others she accepts them as they are, and as a result is able to see the reality behind the façade.

Dahlia has been unemployed for a year, living off the generosity of a roommate, and now she's considering accepting a job as a private detective.

I loved that UNFORTUNATE was set in Saint Louis, Missouri. I lived there for a few years while the husband was studying post-graduate, and the locales mentioned in the book were very nostalgic for me. Wirestone adds just enough of the fun quirkiness of the city and its inhabitants; it’s nice to see settings other than what’s currently trendy.

But easily the best part of this book is Dahlia’s narrative. This book is laugh-out-loud funny. (You can actually listen to an audio clip from the book on the Amazon page). Wirestone’s prose is entertaining, Dahlia’s descriptions of the characters and the crazy situations in which she finds herself are fun. And while the book isn’t strictly genre, it’s an entertaining look at gamer geeks and what makes them tick.