Review: The Bands of Mourning 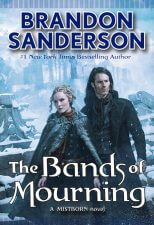 I wasn’t too kind on that installation of the book, but having now read BANDS OF MOURNING, I see now why SHADOWS suffered in my review. It’s because BANDS was the book I really wanted to read.

Let’s start with how BANDS addresses my complaints. I complained that I felt Sanderson wasn’t stretching himself as a writer, instead delivering the same rote stories, experiences, and themes every book he writes. BANDS starts in a similar position, but quickly adjusts itself into a treasure hunting, Indiana Jones-esque story about Wax returning to a life he left after the climax of SHADOWS. It felt different. It felt fresh.

SHADOWS felt like a (topical reference forth-coming) The Force Awakens-style remix of ALLOY OF LAW. BANDS feels like discovering Sanderson all over again. It feels… new. Fresh. Interesting. Like the world has actually evolved and changed beyond the surface level. I felt like the characters had grown in the interim and I felt more connected to Wax and his crew than I had before.

The witty characters who always have a snarky comment? Somewhat still there, but there’s a lot less of it to go around, and the dialogue is stronger for it.

The plot is a little heavy-handed. Sanderson is more exposition focused then he normally is in a novel, and has a very “tell, not show” style throughout the book. Frankly, the reliance on exposition is the book’s weakest point. Sanderson also continues to add new ideas and spins on the magic and setting, and unlike the previous book, where they felt like window dressing or loosely tacked on, here, they relate to the story and fit in, helping the book to flow better.

Coming so quickly on the heels of the previous book (4 months? Wow.), I expected BANDS to suffer from “middle movie” syndrome, but instead, I found it the strongest of the newer Mistborn books.

THE BANDS OF MOURNING requires patience. If you enjoyed the previous books, this one won't disappoint, after the massive ending we got in SHADOWS.

It is a book that requires some patience. There was some lag picking the story back up after the massive ending of SHADOWS, but Sanderson handles it pretty well, and the last thirdish of the book is a whole level above SHADOWS. If you enjoyed the previous books, this one won’t disappoint. If you wanted something more from his latest writing, I think this one covers you pretty nicely.

It’s Brandon back on his game again. A welcome sight certainly.

Read the first couple of chapters for free (Tor Website).