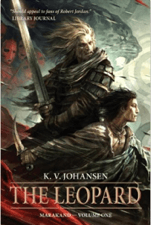 I wanted to like this book, was ready to love it after reading the intriguing prologue, but the rest of THE LEOPARD (Amazon) did not hold up to its early, fleeting promise. What a mess.

Adapted from a Booklist synopsis on Amazon.com: Deyandara is the main POV character in the first part of the book.  She has survived a massacre among her people, then is sent by her goddess Catairanach to find the assassin Ahjvar, known as the Leopard, and get him to agree to kill the Voice of Marakand. He’s accompanied on the journey to the bustling city of Marakand by Ghu, a former slave and the only person close to the Leopard—but Ghu is not merely a slave. The Voice of Marakand is mad, and old, and it seems as though it is a simple matter. (But nothing is simple in this ponderous tale.)

By the second chapter, the prose devolves drastically. I found it overworked and even clumsy, begging for the tight editing of the brief prologue. Throughout there is a preponderance of chaos and blood and violence… followed by bleakness and more chaos and violence. Poetic writing, which that nice prologue hints at tantalizingly, is supposed to be a deft condensation of life. This book is a drawn-out roller coaster ride that never really slows down, just wears the reader down.

The intriguing setting, vaguely Mongolian with Tibetan religious tones, left me hoping for equally satisfying character development and for maybe a tiny beam of sunlight. Ghu is a great character and improves with time. Hope is dashed on every other page, though, and the sun never comes out in this over-long story. (In the wrong state of mind, I might have needed to hide all sharp objects.)  Just when the writing begins to flow, and it does gradually improve by the second third of the book, part two begins and we are introduced to a new cast of POV characters.

I wanted to like this book, was ready to love it after reading the intriguing prologue, but the rest of THE LEOPARD was, quite simply, a mess.

This is jarring because I felt less sympathy for Deyandara and Ahjvar as the story progressed and the abrupt changes in their circumstances did not help. The setting had become less interesting as well, contracting rather than expanding.  It ends in an avalanche of information and uncomfortably shifting points of view, and it was all I could do to finish it. In all, a really great world, some truly original ideas, but not delivered well.