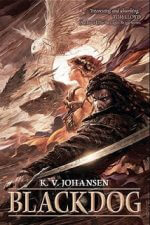 I think I was in third grade when I first learned about river deltas: places where a river empties into a large body of water, slowing from its directed flow into an ever-broadening depository of silt and mass that will, so often, teem with vibrant life. I can’t remember the last time I’d thought about the phenomena that result in such earthy structures, let alone the concept, and yet the analogy between a river delta and this book fit so perfectly to one another that I simply couldn’t deny it.

BLACKDOG (Amazon) is K.V. Johansen’s debut novel, and though I didn’t find this read overly amazing, I did end up making a few realizations about the search for new authors and what might be important when choosing to take a chance on one. The world in BLACKDOG is one that is rife with potential. Gods and demons fill the playing field, with the Old Great Gods having removed themselves from the scene quite some time ago. Attalissa, one of the plethora of regional-specific gods, has chosen of her own will to evidence herself as a mortal being that is perpetually reborn. She has taken for herself a protector, the Blackdog, that rears and teaches her of her potential and history with each renewal of life.

The story starts with a bang, as the renegade wizard, Tamghat, has gathered and brought an army to the doors of the Lissavakaili temple, on an island in the middle of a sacred lake within the holdfast of the mountains. Attalissa, alas, is too young and has not yet come into her godly powers. Thus she and the Blackdog are driven by the threat of death from her holy bastion, the only place in the expanse of the world in which she can survive, and into the realm of other non-mortalized, and very introverted gods. Thus, she becomes mortal in the true sense of the word, with no protections and no hope of re-attaining her position of power unless she returns one day and destroys the threat of Tamghat.

And that was really the problem with the story. The girl has to grow up before she can be powerful again and regain her throne.

So, she grows up, and in the interim, we learn a lot about the world, and the other gods, and how those gods interact with the world at large, and the history of the world. Like Tom Lloyd’s cover quote suggests, the book is quite “interesting” in this regard. There is a whole lot of what I considered world-building here, and it is filled with detail. This development, which we get throughout the entire book, was at the crux of my realization because this world literally “teems with vibrant life”. The world felt full. It felt realized. And it filled the pages. Showcasing this ability, I think, is probably what got the book noticed, because the author displays so much of what I think is missed by many others.

The world in BLACKDOG is one rife with potential: gods and demons fill the playing field, with the Old Great Gods having left quite some time ago.

The other half of my delta-analogy though describes what really made the book difficult to enjoy. Amidst all of this apparent “life” and potential, the pacing of the book–which is obviously fast-going right from the beginning–quickly slowed into a languid crawl and never got moving again. Tamghat, instead of going after vulnerable girl and consuming her soul, decides to take up residence in Attalissa’s temple and wait for her to return. Attalissa, instead of trying to find some way of removing Tamghat from his position, runs into the desert to hide and grow up. And a third interested party, Moth (another protector of sorts for the entire world that ends up becoming a major player) has to spend the entire book tracking down Tamghat because she was lazing about in the snowy north, instead camping out in the place where the wizard had been trapped with several others of his kind. So we readers spend the entire book waiting for things to happen. And they do–eventually–but there was nothing surprising about the end in the slightest.

Characterization was pretty rough. A few characters are fairly well fleshed-out, but on the whole they were scattered and had sketchy motivations. The cast of characters was massive too: thirteen. The major amount of time revolves around those few that I’ve listed above, but introducing all the others absolutely slaughtered the pacing of the first fifth of the book. Moth was definitely my favorite PoV, because she was the one character that had clear motivations and concerted movement toward her goal for the entire book. The others just seemed to do a whole lot of waiting, and planning, and passing the time.

On the whole, the book was WAY too long to support the story, but about spot on for what it could have been. There’s so much potential here that I think could really lead to good things in later novels. That is, if that potential is harnessed and instructed and then pointed in a single direction. I’ll be very interested in seeing where this newly-published author goes with her future work.