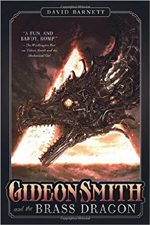 After the exciting events of GIDEON SMITH AND THE MECHANICAL GIRL (EBR Review), Gideon has been dubbed the Hero of the Empire by Queen Victoria, and sent off on quests that only heros can accomplish. Gideon isn’t quite sure what it means to be a hero, other than his stories end up in the penny dreadful World Marvels & Wonders, as recounted by Mr. Bent, the journalist who follows Gideon around.

The one assignment Gideon is waiting for is the one that means he can search for the missing brass dragon Apep and the clockwork girl he loves, Maria. He gets his chance when Apep is spotted over Texas, and Gideon heads toward America.

However, America is not the one you and I are familiar with: the Japanese run California, the Britisth defeated the rebels in the Revolutionary War, the South is firmly ensconced behind the Mason-Dixon Wall. And Texas is an entity unto itself, where Steamtown is lorded over by Thaddeous Pinch, part machine, part human, and completely insane. The only law is Pinch’s law, otherwise the townspeople do what they want–unless you’re a woman then you work at the brothels, are Negro and work in the coal mines, or have somehow earned the wrath of Pinch and his henchmen then you’re probably dead.

Gideon is his usual honorable self, but now he has some training under his belt and can handle himself. However, fighting skills doesn’t necessarily mean he’s improved as a strategist, and his plans usually involve running headlong into the fray. Rarely do ‘strategies’ like that end well, even if he means well. Along for the ride is Aloysius Bent, the reporter from MECHANICAL GIRL that I couldn’t stand, and I still can’t. There’s the pilot Rowena, who remains as cool as when we first met her, although her pining for Gideon picks up steam. We meet some new interesting folks, though, such as the nameless man, Inez, Hart, and Chantico. And of course the evil Pinch.

Gideon is waiting to find the missing brass dragon Apep and the clockwork girl he loves, Maria. A bit ridiculous, but still fun.

The setting is interesting, as far as steampunk goes, the world a different place than we know it. It’s these dynamics of politics, change in history, and technology that drives the story forward… because otherwise the narrative would fall flat. Barnett writes with so much filler that I ended up skimming more than usual. Sure I get that if readers haven’t read the first book there’s back story they’d need. But otherwise there’s so much blather (lots of navel-gazing, etc) and I just wanted to get on with the story. It’s the same as in the first book where I complained about the pacing. Here, the story doesn’t really get going until almost halfway in. That’s a huge build-up timeframe where a few events happen, but it takes a long time before threads start connecting.

Finally everything comes together in a more cohesive way than in MECHANICAL GIRL, even if it gets pretty zany… which isn’t a bad thing. Both books use impossible scenarios, with our heroes getting out alive despite the odds. Not that there aren’t casualties. In all Barnett tells an exciting story and is clever enough about it to keep readers entertained.