Review: The Slow Regard of Silent Things 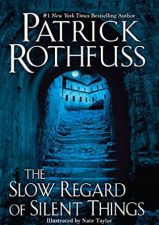 THE SLOW REGARD OF SILENT THINGS (Amazon) is not exactly a title that reaches out and grabs you. No? I mean, when was the last time you actually saw the word “slow” in the title of a book? Okay, there was SLOW APOCALYPSE (EBR Review) — not my favorite. Or there was also SLOW BULLETS (EBR Review) — not half bad. Or “silent” for that matter? Hmm. THE SILENT LAND (EBR Review). Maybe this is turning out to not be the best analogy…) Let alone both in the same title? Hah! I don’t know of any others.

And with good reason. What does such a title say to you that this book will be about? Let’s see. A story about paying lots of attention to things that don’t talk over a long period of time. Probably not a lot of action then, eh? And you would be correct in assuming such. Even Mr. Rothfuss himself, in the author’s introduction of the novel (because I listened to this one on audio book and he narrates it and does a brilliant job of it), says that he didn’t think that he’d be able to sell this story because very little actually happens. It’s more of a character study, he says. But the publisher liked it, and so Huzzah!

This story is about Auri, the young girl that lives in the big underthing that we meet in THE NAME OF THE WIND, and is completely missing in THE WISE MAN’S FEAR (EBR Review). At least, I can’t remember her being in that one. Perhaps I’ve just forgotten, though. Regardless, this vignette is all about her, and in it we’re to learn more about Rothfuss’ world and how it works.

As I mentioned before, very little of note actually happens in this book, but it is quite beautifully written. Auri spends several days leading up to some interaction with Kvothe traveling around the underthing and moving stuff around. But it’s only stuff that she feels needs to be moved that actually gets moved. Then when she finds a place for that thing, she places it there, sometimes trading it for something else, and she finds that the thing she’s placed feels right in its new spot.

Mostly it felt like the author had fictionalized the events leading up to the moment when I arrive home after a long day from work to find my house in complete disarray despite my loving wife’s best efforts to keep the chaos of the summertime kid-romp at bay. I mean, who decided that the TV controller belongs in the flowerbed? Or that this particular tube of chapstick should be taking a nap down in the toe of my basketball shoe? Better yet, why is there flour sprayed all over the bathroom floor? It’s completely inexplicable, and yet those things must belong there because that was where I found them. Someone seemed to think so at least…

By the end I can definitively say that I have no idea how his world works and learned just about nothing from the story. I’m also convinced more than ever that I have absolutely no idea what the story in his main sequence is about. I don’t know where he’s going with it. I have a hard time believing that anyone does except for him. He’s always said that the story in his trilogy ends after book three, and all I keep hearing from people is “No way — this story is too big.” And I agree with them. Completely.

THE SLOW REGARD OF SILENT THINGS is well-written, engaging, but ultimately a frustrating piece because I don't think it actually accomplishes anything.

Well-written, engaging, but ultimately a frustrating piece because I don’t think it actually accomplishes anything. Much like THE WISE MAN’S FEAR, in that regard, for me. This fact concerns me somewhat, but I doubt it’ll keep people from buying his books or me from reading them. I mean, I’ve been all the way through all of his stuff, and I never find myself asking questions like “where is this all going?” until it’s all over and I realize that I’ve obviously missed something that should have been important before this point in time.

Is it a bad thing that he can make me forget things like that? Doubtful. Just shows his prowess. Still, it’s all consistent with what he’s giving us elsewhere.