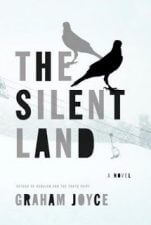 THE SILENT LAND (Amazon) is a Graham Joyce novel, an author with quite a few works already under his feet. It’s a quick, focused read revolving around the relationship of a single couple, Zoe and Jake. Zoe is the main PoV character, though Jake’s thoughts are peppered infrequently throughout the book.

Zoe and Jake are on vacation, skiing in the Pyrenees mountains above the village of Saint-Bernard-en-Haut. They’re out for a brisk morning slide down the mountain, when an avalanche descends on them from above. After making their way out of the resulting mess and back to their hotel, they find that everyone has gone, with nothing to explain their disappearance. The rest of the story details what they do there, on that lonely slope, all by themselves, and how it all turns out.

Joyce’s prose is excellent here. Fluid, descriptive, riveting. The setting of the small skiing village, the majestic mountain side, and the ever-oppressive weather were one continuous landscape that easily transported me to their surroundings. The plot develops well, moving from one discovery to the next, laying out the pieces to this couple’s predicament one layer at a time. At times, the portrayal of their story did feel truncated to some extent, but that’s probably what kept the book so short, which was nice.

There weren’t very many large surprises in this one, and I pretty much knew what was going on from the get go. It was interesting to see how Joyce laid his story out though, and to get into its telling. I do tire of the tool some authors use to try and relay tension by having characters “feel” or “sense” that something is going to happen. Thankfully, this wasn’t the only tool used to develop the atmosphere of the unknown that pervades the character’s minds.

THE SILENT LAND may be a fantasy novel, but its literary style leanings may more likely determine if you'll enjoy this novel.

There were also quite a few references to money and religion, death and life in general that really made it more of a literary novel than anything interesting. Guess I’m just not interested in the questions and ideas that literary novels try to develop. I’d rather get lost in the snow-stormed mountains with a dragon, or, honestly, get trapped in a town like Silent Hill, than read about the nuances of society. Call me a geek. It’s what I am, and I wear the badge proudly.

I can’t say I didn’t like this one, but as far as the story goes? The ideas? The fun? It’s on the low end of things. Read this one if you like literature. It definitely won’t leave a bad taste in your mouth.