Review: The Rise of Ransom City 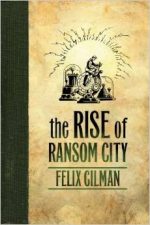 I like surprises. At least, I like some kinds of surprises. Those like finding twenty bucks in an old pair of pants, or running into a long-lost high school friend while on vacation. There are some surprises though that I don’t particularly care for. Say, the sharp end of a tack poking up through my chair *after* hearing my pants rip open. Or that I’ve run out of gas ten minutes after passing the last gas station for fifty miles. So, I suppose it’s surprises I like that… er… I like. 🙂 Go figure. And after having read the first book in this series, I was considerably less than happy at what I found in this second and final book of the series. An unpleasant surprise to be sure.

THE RISE OF RANSOM CITY (Amazon) is the second of two books written by Felix Gilman about an alternate-history America in which two groups of demons have inhabited portions of the land. There are the forces of The Gun, wild gun-slingers that carry demon-inhabited guns with an uncanny ability to not miss their target. Then there’s those of The Line, who are mostly slaves and underlings for massive demon-possessed trains that travel across an extensive layout of rails. These two groups are each trying to spread their influence across the wide scape of the wild west, while doing away with the other, and spend very little time doing otherwise. Caught in the middle are the rest of everybody else.

THE HALF-MADE WORLD (EBR Review) had a really good setup, with characters from each of the groups of interest in this new version of the Wild West that interacted with one another and came together in a story that was interesting and fun, even though it was somewhat slow at times. The biggest issue I had with it was that up until the very end I had no idea that it was the first book in a duology instead of a standalone book. But actually, after reading THE RISE OF RANSOM CITY, I figured out that THE HALF-MADE WORLD was a standalone book.

This might be a little confusing, so let me explain.

RISE OF RANSOM CITY is predominantly told from the perspective of what would have been a tertiary character from the first book. That is, a character that the main characters come across along the way but who plays no significant role in the story at large. And the story begins when this character, Dr. Harry Ransom, is born. As soon as I read that, I knew I was in trouble. We see the kid grow up, the things he does, the things that are done to him. He crosses paths briefly with the forces of The Line once when he’s young. Then he starts traveling across the open land, the HALF-MADE land of the previous novel, trying to raise money so that he can perfect the invention of his imagination: The Ransom Process, a novel, free way to generate electricity. He crosses paths once with Dr. Liv Alverhuysen and John Creedmore from the previous novel, although he is unaware as to just who they are (and thus are we) for about 90% of his travel time with them. Then there’s some more fundraising trips, and a few other events that come along but I think you’re probably starting to get the picture.

The entire novel revolves around Dr. Ransom, the future completion of his “process”, and his desire to build Ransom City where electricity will be free of charge. Nearly all of the speculative elements of the previous novel are disregarded and ignored. There are brief stints, where the interesting portions of the last novel crossed paths with this new story, but on the whole they are forgotten. And the story struggles because of it. Instead, it is a slow, mostly boring slog through the life of Dr. Ransom.

In my opinion, there is really only one book in this series worth reading and it's not THE RISE OF RANSOM CITY. Check out THE HALF-MADE WORLD instead.

And just because I had such a difficult time with this one, and I’d rather try to dissuade most readers from giving their precious time to this book, I’m going to spoil the ending for you. Ready for this?

No ending. Yup, you heard me. The fact of the matter is that this is an “autobiographical” tale, that was “truly” written by Dr. Ransom, and the final portion of the novel–the parts that concern the actual rise of Ransom City–were never found. Thus, there is no ending.

So, in my opinion, there is really only one book in this series worth reading, THE HALF-MADE WORLD, and it should be regarded as a stand-alone book, despite the fact that it only contains half the story of The Line and The Gun. Alas, it looks as if we’ll never know what happened, and I’m somewhat perturbed about that. Avoid wasting your time with this one.