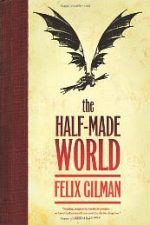 Until recently I thought Felix Gilman was associated with the Warhammer 40K books, which I really didn’t think would be for me. So, I never picked up any of his books. Honestly I don’t know what ever put that idea into my head, but a couple of weeks ago an impulse sent me out to check my sources and I found out that Mr. Gilman wasn’t associated with the 40K books at all. Although, one of the main characters of the Warhammer 40K books was named… can you guess? Yup. Felix. I am so ashamed.

THE HALF-MADE WORLD (Amazon) is Felix Gilman’s third book. The first two were a duology, and this starts a new story that was really a whole lot of fun to read. The premise revolves around an alternate version of the Wild West with a whole bunch of twists on it. There are four major players in the game this time:

The Line is led by a few dozen massively sized, demon-possessed machines, as they are expanding their influence across into the Western U.S. They travel by rail, are ubiquitous with smoke and oil and grease. They contain within their arsenal machine guns, helicopters, tracking devices, amplifiers, noise-bombs, and a whole host of other goodies. They are the advanced technological mode of the Wild West and they are coming to swallow you whole.

The Gun is a scattered mob of toughs that each carry with them a gun possessed by a demon. These are the bandits of the West. The demons of the Gun and the demons of The Line hate one another and want nothing more than to wipe the other from the face of the land. The Agents of the Gun never have to reload, their bodies heal at an advanced rate, and their masters provide them enough speed and strength that make capturing or killing an agent is nearly impossible, though it has been done. The demon-possessed Engines and Guns can be destroyed, but the demons that inhabit them are later reborn in another gun. Or another engine. A condition that only perpetuates the war.

Two other groups, the Hill Folk (Indian-like people that can be killed but come back to life later) and those that are unaligned (nothing special about these poor schmucks), are caught in the crossfire of The Gun and The Line again and again as the war wages across the hills.

The story starts as Liv Alverhuysen, a psychologist who has just lost her husband, has received an invitation for her husband to visit a hospital on the far western edge of the explored world. They need help with certain patients that have lost their minds from the noise-bombs of the Line. She decides to accept the invitation for her husband and makes her way there. Creedmore is an agent of the Gun, though one that has been out of favor for a time. He’s called upon by his master to find a General that has been found in a hospital far to the west. This general has a secret within his scrambled mind of a weapon that can kill the demons. Lowry, a leader of The Line, has been given the task of finding… are you following this?… a General. In a hospital. In the far west.

Reading the first five chapters of this book taught me just how much I LOVE a setup. And to find it so early in the book, I was mega-excited. Not only is this story well structured, it’s full, too. History and description and character fill the pages, and it all just flies by because Gilman does such a great job of making us forget that we’re reading a book. His prose is fluid and descriptive and immersive. Secondary characters were meaningful and important to the story. There was so much to love about this book and I gobbled it all down eagerly.

THE HALF-MADE WORLD is very near the top of the Like scale for me. The stakes have been upped and the mystery has grown.

I only had a few issues with the book. The first was rather large though and dealt with the idea of the “half-made world”. The far western edge of explored lands was supposed to lead into the half-made world, where the land was nebulous, and the dreams of visitors and inhabitants formed the world into what it would be. It’s a place where things aren’t named and no one visits, for fear that they will die within its reaches. And yet, once the story progresses past this western border, the results were less than impressive. In fact, except for a very few pieces that were actually pretty cool, the land felt very mundane and normal, with flora and fauna and even settlers. It was a bit deflating to find so little new when I got there.

My second disappointment was on a mid-range level and concerned the minimal amount of action in the book. There is some, but by and large it’s really short or avoided. With the huge setup and convergence of the major powers of the West on this hospital, I expected a BIG shebang. What I got was good, just less (and more delayed) than I had anticipated. Though I am expecting goodness in the next book.

The third tripping point, and this really doesn’t have any reflection upon Mr. Gilman at all, is the fact that for essentially the entire read I thought this was a stand-alone book. It isn’t. In like manner to his previous offering, this story was developed as a duology. So the ending I thought I was going to get wasn’t there. There definitely was an ending, and I felt like it was satisfying once I realized what it was. I love the fact that this guy is writing two book series (different!), and the ending on this one was good. It just would have been nice to know ahead of time what I was holding. Trilogies are marketed and labeled as such. Multi-book series similarly. Standalone books look like what they are. Duologies don’t crop up that often, but they need to be labeled differently. They’re NOT standalones. Someone needs to do something about this.

On the whole, this was a really fun read and should lead nowhere but up in the next volume. THE HALF-MADE WORLD is very near the top of the Like scale for me. The stakes have been upped and the mystery has grown. I’m actually really excited for the next, and if it doesn’t come out pretty soon I may just go back and see what his previous books were like. Actually, that doesn’t sound like a “half”-bad idea. Hee-hee.