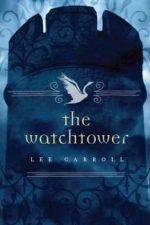 Garet James is the last in a line of women “watchtowers” who protect humanity from evil–particularly the magic kind. In BLACK SWAN RISING (EBR Review), she had to learn about her unknown powers and save New York City from destruction. She had the help of fairies, goblins, as well as that of the rich and handsome vampire Will Hughes. But he has disappeared, leaving clues for Garet to follow.

If you remember my review for BLACK SWAN RISING, I had a hard time with the love story between Garet and Will. It was sudden and inexplicable and emotionless–it’s hard for a romance to be believable when you don’t understand why two characters love each other. So when the second book, THE WATCHTOWER (Amazon) so depended on their love in order to explain Garet’s motivation to follow Will… it didn’t bode well.

Garet must travel to Paris and find the path to the Summer Country to find Will on his quest to cure himself of his vampirism. Those details are interesting and creative as Carroll draws out the history and lore surrounding the magic of the Fae and their lives in Paris. Carroll also does well painting a picture of Paris itself and its view from an up-close street level–much like was done successfully with New York City in SWAN.

Unfortunately, that’s the best part of the book, and it’s not enough to keep the reader interested. Instead, we get the love story of Will and Marguerite (Garet’s grandmother+great I don’t know how many times, it wasn’t clear) of 400 years ago mixed in with Garet’s present-day search. What’s wrong with that, you ask? Carroll already told us how that particular story ends in SWAN. So I’m reading a story of a spoiled and emo 19-year-old Will falling in swooning love at first sight, and I already know what’s going to happen… and, yeah. Had a hard time enjoying that. Add on the fact that Garet and Will spend the majority of the book apart, and when they’re together I’m still not sure why they love each other.

THE WATCHTOWER is about Garet, whose magic was designed to protect (hence the name 'watchtower'). Unfortunately, she doesn't do much protecting.

If I had liked Will more, I might have been more interested in his origins, but he behaved so erratically and took Garet’s stuff only to leave her behind in SWAN, so going into THE WATCHTOWER I would have been fine if she’d washed her hands of him. My other question is: Why name the book THE WATCHTOWER if Garet doesn’t do watchtower-ish things? Sure she is clever and able to follow the clues, but she leaves the hard stuff for others in the end. Again. Maybe the book is about Marguerite the original watchtower? But we don’t see Marguerite protect the world from evil, she just moons over Will. Now I understand where Garet gets it from. But I still don’t understand why.

And then the Summer Country and time travel and magic watches and… I just got confused at where the story was taking me. Why the characters did the things they did. Why magic worked the way it did. By the end I just wanted it to be over. There will be a sequel. I don’t plan on reading it.