Review: Lance of Earth and Sky 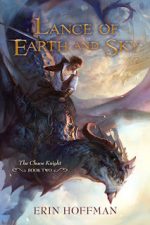 I think I’ve mentioned before how I like to see authorial “progress” from one book to the next. Seeing them get better in at least one aspect of their craft with each progressive offering to the reading masses gives me hope that there will, someday, be more authors that I love to read. In general, I think that most authors fall into this category. It’s hardly ever that I find one that seems to have regressed further from the goal that I think each of them should strive for: greatness in storytelling. As I’m sure you can guess by now, this book is one of those.

LANCE OF EARTH AND SKY (Amazon) is the second in the planned Chaos Knight trilogy and continues the story of Vidarian Rulorat and the empire of Alorea. Mostly, however, this is a story about the empire, as Vidarian factors so little in what actually happens.

After the end of SWORD OF FIRE AND SEA (EBR Review) (spoiler for the first book!), a dimensional portal of sorts has been opened and all sorts of chaos has been spread across the land. The natural magic present in the world has quickly faded away and been replaced by an elementally-based magic system that feels very much like Wheel of Time run through the rule-based powers of Frozone (Samuel L. Jackson) from the Incredibles. Use the element—water, air, fire, earth—that is available and channel it into streams that you can ultimately weave together and blast people with.

The replacement of this magic has upended the entire world, killing off a large number of leaders that have been magically lengthening their lives. In the wake of this chaos, the trading company that has been dictating what the government of Alorea was doing, begins to take a decidedly more direct route to governing. Additionally, the opening of the gate has brought in magical items and constructs that have been absent for centuries. The changes that have come in the wake of the open portal are constantly reiterated throughout the book. Almost like a mantra.

Sorry, where was I? Oh, yes. Regression.

The crux of the problem with the book was that where SWORD was very linear but adventurous, LANCE is very linear and pointless. The main character, instead of doing anything of import, spends nearly every waking moment meeting someone new, introducing himself to them, drinking another cup of kava, or listening to other people talk. It was uber-frustrating. When he finally does do something vaguely interesting, the outcome feels more like he did it so that the author could showcase another part of the world-building.

Some cool aspects, a few wrenches in the plot; but other than that, alas, LANCE OF EARTH AND SKY is a regression from book 1.

If anything, further world-building seemed to be at the heart of the book, and yet none of it really did anything to develop the world. Thus, instead of the presentation of the world feeling like an oil slick riding across the surface of an abyss-deep ocean (good), it comes across more like a puddle of water spread across the concrete (severely lacking).

There were a couple aspects of the story that stayed consistent between the two books: there are still a ton of characters surrounding Vidarian, nearly every one of them able to communicate telepathically. About half of them this time can shape-change as well though. The ending was also incredibly lacking in impact again. Incredibly, the largest-seeming event in the entire book is given away on the back cover. There was very little in the book that held what I like to see, and that’s a solid reason in my mind to stay away from the rest of this series.

On the up-tick, if you’re looking for a book to just stroll through, with no real thinking necessary, and give you a great way to suck up a few hours, grab this one. It’ll definitely be good for that.