Review: Sword of Fire and Sea 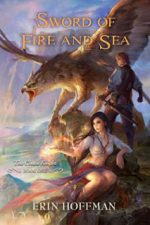 I, like any decent purveyor of story critiques, am an author-hopeful. Once, about ten years ago and near the beginning of my writing “career”, I came up with the idea of evil monsters that could travel through shadows to get where they wanted. I thought at the time how creepy and cool something like that could be, and that I might actually use these shadow beasts in a story someday. That is, until a good friend of mine suggested that doing so might not be such a great idea because the bad guys could just wait until night time (or ANY time/place that it got dark) pop in on our heroes, slaughter the lot of them, and then take over the world. End of story. I’ve moved on since then. This novel felt like it hadn’t.

SWORD OF FIRE AND SEA (Amazon) is the first book in a trilogy named The Chaos Knight and is Erin Hoffman’s debut novel. It is a story told from the perspective of a ship’s captain, Vidarian Rulorat, who has been called upon to fulfill a generations-old family promise to the fire priestesses of Kara’Zul. His mission, should he choose to accept it, is to accompany Ariadel, a special fire priestess, from the temple of the fire priestesses in the north to a friendly temple of water priestesses in the far south. Along the way, he encounters rogue telepaths called the Vkortha, mighty gryphons, love, betrayal, and a prophecy or two, as well.

This one fell within my 10% rule pretty quickly, and if I hadn’t been asked to review it, I would have bailed really early. It wasn’t that it was particularly bad, there just wasn’t anything that really grabbed me. The prose is decent, though quite explanatory, and stays pretty high-level. Characterization, unfortunately, sums to essentially null. As the story progresses, and the main party amasses more people and more sentient gryphons, the names and references all got jumbled and difficult to tell from one page to the next who we were talking about now or really what was going on at all.

At times the story tried to get bigger, bringing in a trading company that dictates what the central government does. Then we’re introduced to the prophecy of the one that is supposed to come and seal away the chaos magic forever behind an already closed gate. These scenes though were counter-balanced by others that just cripple the story—-the most memorable being the entire chapter devoted to the massage house, with its masseuses and their lotion. And there was a cat. I’m sorry, but I just hate finding cats in fantasy novels. I should probably write a fantasy story about a cat sometime so that I’ll hate them less.

On second thought, no, I shouldn’t.

There’s nothing that was absolutely unforgivable about SWORD OF FIRE AND SEA, it’s just that there was a whole lot of mediocrity.

The plot of SWORD is very linear and progressional, with one event/task leading the main party of characters to the next. In so doing, they travel quite extensively and visit many places that are quite difficult to discern from one another. Each trip is completed by gryphon, and so these legs of the journey happen on a very short time scale. This leads to a really vague sense of just how big the imagined world of the story is and how each of the individual pieces of the world-building fit together. I’ve heard complaints before about the horse being the “fantasy equivalent of a motorcycle”, and in this one the gryphons act as almost a perfect substitute for the “fantasy helicopter”. They move the characters from one location to the next, flying through the air at fast speeds, and never seem to get any attention. At times they impart information. In others, they fight a bit, though those scenes are few and far between.

The two largest difficulties I had were the nebulous magic system and the lack of an impactful ending. The main character acquires the ability from a goddess to access the magical power of the world, and then starts using it with little to no training or effort as if he were a prodigy. At each of these times, he uses the magic “without thinking” or he just knows how to do what he wants, as the power is somehow tied to his will. At one point, the Vkortha use a wind-storm to swoop down on the main characters, steal Ariadel—the special fire priestess, in case you’ve forgotten—and then disappear. (Shadow monsters, anyone?) Later, the main character is given a magical power equivalent to that needed to move planets within the universe. (Sunshine…heroes maybe?) Every time the magical ability came up, the results seemed to get more and more preposterous. And then the big bang ending, which kept getting referred to throughout the book, passed like a puff of air and seemed to be forgotten entirely. At first, I totally thought that I had missed it, but no. The impact just wasn’t there.

Looking back at this review, I’m seeing a whole lot of complaint and I apologize for that. Really, there’s nothing that was absolutely unforgivable about this story, it’s just that there was a whole lot of mediocrity and it was handled in a fairly poor way. If I could take back the time I spent on this one, I definitely would. And if you get the chance to read this one, and you think anywhere near like we do here at EBR, then I’d probably suggest that you pass on it as well.