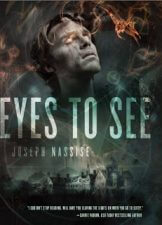 Anyone looking for some more Dresden-ish stuff? PI with a dark past stalking the urban fantastical with ghosties and ghoulies galore to entertain? Sound interesting? I’m sure to some of you it will. In all honesty, I’ve only ever read the first two Dresen novels–yes, you will probably throw things at me for this. Just please avoid tomatoes as I might be violently allergic–but I did enjoy them both, and although the Dresden books are a bit better, I think I can easily throw this book in with those without a second thought.

EYES TO SEE (Amazon) is by no means Joseph Nassise’s first novel–he has something like twelve others under his belt. This is, however, his first novel with Tor, and is a pretty good showing overall.

Jeremiah Hunt is the main protagonist of the story. He’s a PI that lost his daughter years ago and has been on the hunt (heh-heh—Hunt is on the hunt) ever since. His intensity surrounding this quest has lost him his wife, his home, and, through events of his own choosing, his sight. Through a run-in with powers strong and arcane, Hunt now sees that which thrives in the dark. Sunlight blinds him, and so he’s learned to live at night. But the dark isn’t all that Hunt sees. His unique “reverse” vision also allows him to see ghosts and other denizens of the supernatural sort that inhabit the streets of Boston. He even has a couple ghosties of his own. He survives financially by banishing minor ghosts from their local haunts, and emotionally by draining what few new leads he can about his daughter from the Boston PD.

And then he’s called in on a case that gives him a real lead on his daughter, and the chase is on.

Jeremiah Hunt is a PI who lost his daughter years ago and has been on the hunt ever since in EYES TO SEE. Somewhat amateurish but fun.

The biggest thing this book has going for it is its quick prose and good world-building. The story flies along from one crime scene to the next, from one battle to the next, from one bad guy to the next, and nearly all the down time is filled with helping us to learn about this other-world that Hunt has learned to inhabit. At times it flirted with being cliché, but never took that last necessary step and made me get annoyed with it.

Page time is split between two Hunts (past and present), the villain, and two other minor characters. The book would have been so much better if the story had just stuck with Hunt though. Both minor characters were distractions that never seemed to lead anywhere, and the POV from the villain sapped a lot of potential tension that could have been raised otherwise. I do also somewhat wish that Hunt’s past-timeline would have impacted the present-timeline more. It felt more like it was just there to explain what happened to him to make him the way he was. In that way, it reminded me of THE LIES OF LOCKE LAMORA. In that one, even though the story of Locke as a child was interesting and fun, it didn’t impact the main story line at all and bugged me a bit as well. Although, you might be saying, LOCKE LAMORA is not exactly bad company for a book to be in, and I would have agree with you, though the only correlation between these two is the source of my minor annoyance. Moving on.

Unfortunately, the ending was a pretty big let down. Although it was pretty action-packed, most of the events leading to the climax felt contrived and convenient, instead of natural. Things had to happen in a certain way for the ending to happen the way it did, and so that’s the way they happened. Done and done. Despite this fact, I still liked the time I spent with these pages and will be visiting the sequel with a decent amount of anticipation.

Even though this isn’t Nassise’s first book, there were still a bunch of aspects about the story that felt amateurish to me. It’ll be interesting to see what Tor’s expertise will bring to Nassise’s writing and storytelling skills in his next offering to us. He’s definitely starting in a good place. Check this one out if you have some spare time. It’s a fun read.