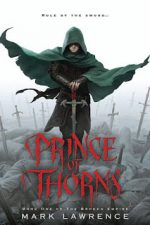 Well. Geez. I know who is getting my vote for the John W. Campbell Award this year. And the David Gemmell Morningstar Award.

I’d heard so much about Mark Lawrence‘s PRINCE OF THORNS (Amazon). In fact, I’d heard so much that I was starting to fall into the “There is so much hype that it is bound to be terrible” camp. I finally caved and went out and bought the novel. And holy crap… wow. Didn’t catch that the first time? Let me restate that. Holy Fraking Crap! This novel was AWESOME!

“Is revenge a science, or an art?” It’s a question asked by the main character of the novel, Prince Honorous Jorg Ancrath. He’s really only a boy, but his youth was destroyed when he watched his mother and brother murdered when only ten years-old. It’s the kind of thing that breaks a person, and when the pieces get put back together, they form a much different picture than the original. I was sold on this novel right from the opening chapter, yet those doubts kept creeping in, telling me it would last. Those doubts were kicked out the door. PRINCE OF THORNS was awesome from the first paragraph to the last.

I’m trying extremely hard not to run around in circles, laughing like my 2 year-old is prone to do. PRINCE OF THORNS reads a bit like a dark and dirty version of a David Gemmell or Robin Hood novel that got some influence from Glen Cook and Joe Abercrombie. Uh huh. Awesome.

The introductory premise of the novel is simple enough. Revenge. Jorg wants revenge on those that killed his family. But it becomes soooooo much more than that while still staying true to that original goal of revenge. But let me be clear: this is not a novel for those of you wanting a “good guy”. There really are no good guys here. That said, I became attached to Jorg because of how broken he was and how he fought for everything.

PRINCE OF THORNS is told in 1st Person, which could have absolutely wrecked this novel. Instead it lets the reader appreciate Jorg’s views on things. The writing as a whole was silky smooth and relentlessly dark. Honestly, I’ve having a hard time fathoming that Lawrence is a brand new author. His work just seems so professional. So full of experience. The action scenes are paced near perfectly. The “slow” moments all have direction leading towards the final goal of the novel.

OK, it can’t all be awesome, right? There has to be some negative thing that was bothersome. Uh, no. I will warn you readers out there, however. For a while I thought this was Alternate Historical Fantasy. And then something crazy happened that made me lean more towards Post-apocalyptic Fantasy. I thought it was an amazing twist. You might feel differently.

PRINCE OF THORNS is *the* debut of 2011, and in my not-so-humble opinion is one of the best debut novels I've ever read. Dark Fantasy doesn't get better.

Seriously, I can only say positive things about Mark Lawrence’s debut. The label “Fantasy Debut of the Year” gets thrown on so many mediocre novels these days. PRINCE OF THORNS actually IS the debut of 2011, and in my not-so-humble opinion is one of the best debut novels I’ve ever read.

This is the reason I read, folks.

Buy this book. It is worth every penny.