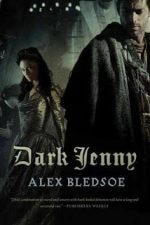 Important disclosure: this book was completely not for me. At the same time though, I think that there are a bunch of people that will really like the thing. Let’s make this clear though: I’m not one of them.

DARK JENNY (Amazon) is the third Eddie Lacrosse novel by author Alex Bledsoe. I haven’t read any of the other novels in the series prior to this, but I don’t think I suffered because of that. This time is told as a frame story about something that happened a while ago in Mr. Lacrosse’s life, dealing with the history of Great Britain… erm… Grand Bruan.

Eddie Lacrosse is a “sword jockey” (read: private investigator) in a fantasy world that is very solidly Arthurian. In fact, it’s so Arthurian, that all of the major players are present: Arthur, Gwenevere, Lancelot, Morgan, Merlin, and all the Knights of the Round Table. Of course, they all have different names, so it’s not really a re-telling of the Arthur tale, but… it is. The only real new players in the tale are Mr. Lacrosse (focus point of the tale) and, of course, Dark Jenny (minimally).

The story starts out with Mr. Lacrosse having been hired by a woman to search out her husband, who has been decidedly lacking in his husbandly affections as of late. Eddie’s a sarcastic, wry, and yet somewhat sentimental kind of guy that has a very easy way of telling his tale. In the process of Eddie’s investigation, he’s implicated in the death of a Knight of the Double Tarn (read: Round Table). Although very few of the other knights believe Eddie might have had anything to do with this death, he’s arrested and then quickly given a leash long enough that he can clear his good name. The story rushes from one place to the next, rollicking between fights and poisons and ogres and invasion, never really slowing down until we get to the end.

DARK JENNY proved to be mostly a fluff novel with a little mystery for fun, but maybe that's what you're looking for. Good writing, but not very substantive

Bledsoe’s writing is good. It’s fast and easy. Unfortunately, except for our main character, Eddie, nearly all of the other characters come off as cardboard. World-building is essentially nil, with the bulk being laid upon the back of the reader’s prior knowledge of Arthurian England. There are occasional mentions of “walking through the castle” or about “so-and-so wearing a suit of armor”. There are swords that pop up occasionally too. The naming convention was incredibly modern, which really made it quite difficult for me to get into the swing of things. The story could have easily been stripped of its Arthurian trappings, of the “fantasy” setting, and but for one very small scene been entirely told as a modern-day mystery. It probably wouldn’t have been as interesting though. So, two cheers for frilly settings. Hip hip, hooray! Hip hip, hooray!

This novel was very status quo mystery for me. The climax was even the culmination of a plethora of “I’m not going to tell you” moments followed by the ubiquitous “here’s how it all REALLY happened” explanation. The only things that really save it in the end is that the story just reads so dang fast and it doesn’t ever take itself very seriously. It’s a frolicking, fluffy, marshmallow of a story that you can get into and get out of with very little effort.

I can absolutely see that there will be people that will LOVE this novel. In fact, Amazon reviews are actually quite high, thus reinforcing my thoughts. Still, there’s nothing here that was out of the ordinary, or surprisingly new, or really even worthwhile for me. Solidly mediocre. It wasn’t bad by any stretch of the imagination though. So if you’re in for this kind of fluff novel, you might want to pick this one up. If not though, you know where you can go for some goods.