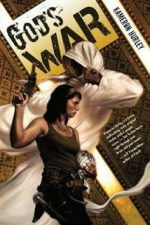 If I haven’t said so before, Night Shade Books is putting out some seriously great stuff. There just comes a point where I get tired of all the same crap out there, and need something completely different. I’ve had this type of experience before with other novels from Night Shade like THE WINDS OF KHALAKOVO and NEVER KNEW ANOTHER. This time it was Kameron Hurley‘s GOD’S WAR (Amazon) that had me nodding in appreciation.

GOD’S WAR is an SF novel taking place on a world that is currently entrenched in a Holy War, and has been involved in this same Holy War since… well, forever. If you are a male, you get sent to the war front and have what amounts to an almost zero-percent chance of survival. The war is brutal. This story follows Nyx, a female bounty hunter who used to be a sanctioned assassin (they call them “bel dames” in the novel) as she takes on a mark that has potential to alleviate all her financial concerns. Of course, as a reader, you know that nothing good can possibly happen in this type of scenario.

Pretty much everything technology-based in GOD’S WAR is done through bugs. Most everything is organically grown and repaired through small and large creepy crawlers. Organs and limbs can be regrown. Everything has a kind of dingy feel to it.

The characters in this novel are all deeply flawed, and perhaps that is why I enjoyed the novel so much. Perfect characters are boring. Characters that have to overcome themselves as much as their external obstacles, however, really work for me. Nyx is the main character, and she is essentially a complete screw up. Her decisions–often poor ones that he has alternative but to make–lead to terrible situations. The other main character is Rhys–a “magician” from the opposite side of the war. He has a limited ability to control bugs. The dynamic between the two main characters is great. The weird loathing trust that has a slight hint of attraction is extremely well done.

The tone of this novel is very grim. Very dark. There is a overall sense of hopelessness that this Holy War is eventually going to kill everyone. And that is where the main story comes into play. That job I mentioned earlier? It not only pays well, but just may end the war. Of course, there are ways to end a war while making things so much worse. That is what this novel explores. Of course all of this is reinforced by some pretty wicked-awesome world building. From politics to religion, Hurley covers it quite well in the novel. It’s all top-notch, really.

There were a few things that nagged at me while reading. I mention them because I would be completely enjoying the novel, and then get yanked out periodically. The main thing was transitions. When switching from one PoV to another there would be no time anchors. Sometimes only a little time had passed, and at others a LOT of time had passed. It’s like the clarification that would have smoothed this all over was cut just to get to the next section in a hurry. GOD’S WAR isn’t long. Smoothing these parts out would have made this novel one of the better ones of the year for me. Additionally, another really minor thing is how it seems like Nyx’s forward motion in plot centers around her being abducted every few chapters. It gets a tad worn.

GOD'S WAR is exactly the type of novel needed by readers everywhere to get them past the monotony of general SF and Fantasy.

But look, the rest of the novel more than makes up for those small annoyances. The real test is whether or not I see improvement in the second novel, INFIDEL. And yes, I will most certainly be reading it. GOD’S WAR is exactly the type of novel needed by readers everywhere to get them past the monotony of general SF and Fantasy.