Review: Shades of Milk and Honey 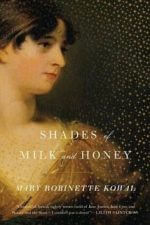 Introduction: Before you read the review Dan Wells has crafted for you, there is something we at Elitist Book Reviews need to make clear: Dan Wells is a jerk-face. We mean this in the nicest way possible. He is an amazing author, a terrific friend, and a cylon (what’s not to like?). And yet, he is a jerk-face. We let him borrow the ARC to SHADES OF MILK AND HONEY (Amazon) with the intention of guest-reviewing it for us. He then promptly read, loved, and reviewed it on his website. The problem? It was supposed to be posted here first. We were given strict instructions that we could not post the review of Mary’s novel until it was released… and then Dan stole our copious amounts of thunder. Like we said: jerk-face.

It’s OK though. Why? Because Dan’s review encompasses everything we could possibly say about Mary’s debut novel. We hate Jane Austen, but even we were entranced by this novel.

So, that said, enjoy the review that Dan (the jerk-face cylon) Wells originally wrote for our blog. ‘Cause, you know, he owes his awesomeness to us.

Here’s the problem: Mary Robinette Kowal is too good. Not only is she famous, and gorgeous, and brilliant, she’s also a really good writer. This cannot be allowed. I tolerated it before, when it was just award-winning short stories, but her new book SHADES OF MILK AND HONEY is too much: clever and simple at the same time, with an unerring sense of historical yes-that’s-exactly-right-ness, and a mastery of craft and form belying the fact that she, like her characters, pretty much created the form out of nothing. To write a book I enjoyed this much, in a manner so talented I could never hope to recreate it, can only be considered a personal insult. Next time I see you, Mary, you’re dead.

Good fantasy is hard. Good historical fiction is hard. Good period fantasy, combining the best of both styles, is a holy grail very rarely achieved. With SHADES OF MILK AND HONEY, Mary Robinette Kowal has found that holy grail and made it shine.

SHADES OF MILK AND HONEY is a Regency fantasy—a sort of subgenre mash-up of Austen and Tolkien, positing a world where affluent young ladies go to balls and takes walks in the country and try to get handsome, wealthy bachelors to woo them, while simultaneously weaving complex magic spells. Where most Regency fantasies fall down is in introducing a story too filled with swashbuckling adventure, which works great in most fantasy but clashes brassily with the subdued social conflicts of the Regency style. Kowal’s story works—and this is going to sound backward—by making the arcane mundane. Her magic system, an intriguing power of illusion, is used in precisely the way a group of Austenites would use it: as an art form for accomplished young ladies (and the occasional traveling artist) to practice on long summer days, beautifying their homes and amusing wealthy patrons. The conflicts in the story are similarly authentic to the Regency style: magic or no magic, these girls want to get married, and that’s going to require a lot of dinner parties, social balls, and witty dialogue.

The simple story is straight out of Jane Austen, by which I mean that it feels like it could have been written by her despite being primarily new and original. Two sisters, one young and gorgeous, one well into her 20s (very Old Maid-ish by Regency standards) spend a summer chastely fantasizing about the various men in the neighborhood, including both standard Austen tropes (a wealthy landowner and a handsome captain) and original ones, such as a gruff artist specializing in “glamour,” Kowal’s intriguing system of illusory magic. One of the great pleasures of the book is how she weaves the magic into everyday life, keeping a consistent Regency vibe; one of the neighbor girls, for example, uses glamour to improve her beauty artificially, resulting in inordinate fatigue and the occasional fainting spell which, naturally, attracts even more male attention. Glamour is used on the fly, both to enhance music and to create mini portrait-plays called tableau vivants, and it can also be made permanent, adding wind or light or other special effects to the ubiquitous paintings and murals. Our heroine and narrator is, of course, an expert with glamour, and uses it to impress the men, comfort the women, and discover the truth behind the inevitable bounder who tries to take advantage of her naïve younger sister. By the end of the book love has been won and lost, ties have been made and broken, and questions have been resolved in a way both true to Austen yet surprisingly Kowal-specific.

What few faults the book has are minor. In capturing the feel of Austen she has hewn too closely, in parts, to the specific conflicts of Pride and Prejudice; if you’re familiar with that work you will recognize the core premise immediately, and when the villain arrives you will know it several hundred pages before any of the characters. I was also far more curious about the cultural impacts of the magic system than the book allowed for (for example, since glamour can alter temperature, how has society changed by the addition of cheap, convenient refrigeration long before its advent in the real world?), but I recognize that these kind of questions are well beyond the scope of a book about subtle summer romance. The good news is, you know everything about the magic that you need to know, and the story, while beginning initially similar to PRIDE AND PREJUDICE, diverges hugely by chapter three or four, and becomes a thing wholly its own.

What I liked best of all about the novel, in the end, was its incredible artistic accuracy—the story, the characters, and especially the language are exactly, perfectly Regency. In many ways the book works as a historical thought experiment: it’s more than just “a fantasy book in a Jane Austen style,” it’s “the book Jane Austen would have written if she’d written a fantasy.” Word choice, diction, even the cadences of the sentences are dead-on for the period. It’s really kind of amazing, and adds immensely to the Regency feel Kowal creates.

Good fantasy is hard. Good historical fiction (my favorite genre) is hard. Good period fantasy, combining the best of both styles, is a holy grail very rarely achieved. With SHADES OF MILK AND HONEY, Mary Robinette Kowal has found that holy grail and made it shine.

And for this insult, she will pay.