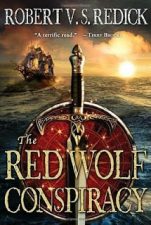 Of course, that’s exactly what I found.

Pazel Pathkendle seems to be the main character of the story. An orphan of sorts that makes his life as a tarboy on ships from the Kingdom of Arqual, Pazel has lived and worked as he made his way from one great vessel to the next. (Think old-school, pirates, cannons, bilge rats.) He hails from a small country and everyone instantly hates him for it. His father was a captain before disappearing from Pazel’s life, though it seems like just about everyone the boy talks to has heard about his father, the traitor. Another reason to hate or suspect him. Eventually, Pazel finds himself hired onto the Chathrand, the last of a fleet of massive ships made long ago, on which sails the peace-offering bride of the Arquali kingdom to their enemies from Mzithrin, Thasha Isiq.

I can’t emphasize enough just how much I liked the writing/words/language in THE RED WOLF CONSPIRACY. The story...could have been better.

Emperors, rulers, mad-men, kings, Benegeserit-like nuns, Brownies (though not named as such), and yes even a sentient rat or two, take part in this fairly straight-forward story that has come together after four decades of Arquali planning and intrigue. (Why so long? Honestly, I’m not quite sure. Yes, even AFTER reading the whole thing.) The Arqualis and the Mzithrins finally want peace. Or do they? Certainly not everyone does. And thus, comes the story to us.

The first few pages easily passed my test. Redick writes fluidly and with great control. He pulls you into the world of Pazel and his friends and we’re instantly transported into his world of ship-life. Though quickly, on comes the world-building. For the most part, this is handled decently-well. There are certainly long passages of semi-pertinent information, great chunks of history passed onto the reader, and several sufficiently-long-that-they-bothered-me bits of dialogue that would have made the book much more difficult to get through if the writing hadn’t been quite so good. After forty-five pages (ten percent, my typical allowance for a new author) it hadn’t really caught my interest, and I probably would have given up on it right then if I hadn’t been reading it for a review. But I persevered. Jogging through mid-scene jumps in character perspective, slogging down significant summaries of interim story, and even past being addressed directly as a reader several times (this is almost an unforgivable sin in my book). The characters seemed pretty one-dimensional, mostly due to the fact that we spend so little time getting to know them because the dang pacing of the story is so fast, and because of this I repeatedly found myself asking, “So what?”

In the end? There were definitely parts of CONSPIRACY that I liked. There were a few “Yes, finally!” moments that came…and quickly passed. The ending left a whole lot to be desired, skewing from the Chathrand completely, wandering through lots of extra world-building touches, and then devolving into about fifty pages of confession and explanation. Though the tale was very fast-paced and had some great potential, the execution was bad enough that I don’t think I can recommend the book very heartily. Lots of good reviews have been garnered by Conspiracy , focusing mostly on Redick’s great world-building, which is good but not spectacular–being mostly a bunch of single pieces and not one interlocking puzzle-riffic whole. (You didn’t know that was a word, did you? Now you do.) If you’re looking for the “Ooh! Aah!” factor more than a story/character-oriented tale, this may just be the book for you. But it wasn’t for me.

I can’t emphasize enough though just how much I liked his writing/words/language. It really did pull me in and drag me along. If Redick’s story had just been put together better, presented better, I could easily see myself liking this book. My suggestion would be to skip this one and try picking him back up again after he’s written a few more. Maybe he’ll have learned the whole trade a bit better by then. We can only hope.