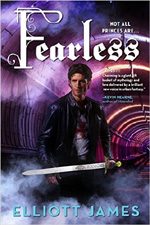 John Charming comes from a long line of monster hunters. Of course, not all monsters are bad, but when you have abilities that make you able to squash mortals without any effort, you tend to not care for the weaker of the species. That’s where the Knights Templar comes in, and the Pax Arcana, which gives hunters the authority to fight the bad guys. But John is different than any other knight: he’s also a werewolf.
Read the rest of this review »

Posted: June 13, 2017 by Vanessa in Books We Like Meta: Elliott James, Urban Fantasy

From the back cover: “Someone, somewhere, is reading a magic book that is reading them right back. The line between fantasy and reality is breaking down, and real life is becoming a fairy tale: bored office workers are turning, quite literally, into zombies, bullies into black knights, and squatters beneath bridges into trolls. John Charming and his motley band of monster hunters are racing to find the real villain of this story, following the yellow brick road through a not-so-wonderful wonderland. And if they can’t find Reader X before the mysterious grimoire is closed, there won’t be a happily ever after again.”
Read the rest of this review »