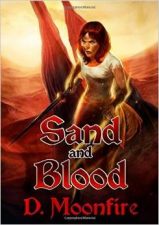 Rutejìmo is labeled among his clan as a useless teenager, and is considered lazy, temperamental, and cowardly. He’s jealous of the much-admired Chimípu, who seems to be able to do anything–she’s more athletic, clever, and better liked. And he wants to be like his brother, Desòchu, who is a warrior and protects the clan; no one believes Rutejìmo is capable of such a thing.

But Rutejìmo gets his chance to prove the naysayers wrong when he, Chimípu, and three other boys are taken into the desert as part of their rite of passage into adulthood. He knows that when he becomes a true member of the Shimusògo clan he will inherit the clan magic that allows him to run faster than a horse and use sunlight as a weapon. The adults, including Desòchu, take the youth into the desert to begin their rite… and leave them to fend for themselves by disappearing during the first night. Rutejìmo can’t believe Desòchu would abandon him. While Chimípu tries to find help, Rutejìmo is left with the three other boys, one is Pidòhu who is even weaker than he is, and the other two who are well-known bullies. And everything goes wrong.

So begins Rutejìmo’s rite of passage.
Read the rest of this review »