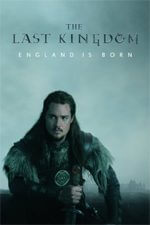 Bernard Cornwell is one of the master storytellers in historical fiction today. I first learned about Cornwell via his Sharpe series based on his books, which take place during the Napoleonic wars (when the show first came out–this probably dates me). Sean Bean played the title character, and after watching the first episode I was hooked, watched the rest of the series, and then had to go back and read Cornwell’s books. When I learned he was writing a series about the formation of a unified Anglo-Saxon England in the 9th Century, I started with THE LAST KINGDOM and have been keeping current with the series ever since.

So imagine my glee when I learned there is a TV series for these books, too.
Read the rest of this review »