Review: Legacy of the Brightwash 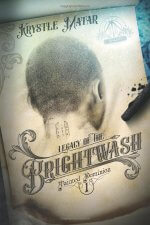 So I sat on this one for a long time. Saw a bunch of hype for it a while ago (thinking last year sometime?) and picked up a copy of the ebook for a steal of a deal. Never got around to reading it though, as something else shiny and pretty always caught my eye first. Recently, I noticed that it had been part of last year’s SPFBO, and it actually did quite well: 2nd place overall. Not too shabby. So, I figured I had better get to it and see what all the hubbub was about.

LEGACY OF THE BRIGHTWASH is the first in a series, The Tainted Dominion, by (currently) self-published author Krystle Matar. The story derives it’s name from the large river that runs through the middle of the town of Yaelsmuir and weaves itself through the aspects of this created world in much the same way as its namesake. Tashué Blackwood, a former war hero and now officer of the Authority, works to watch over those that have been deemed as “Tainted”–those who contain within themselves the ability to use magic.

The world itself is one that is somewhat familiar, and frequently termed as “gas-lamp” fantasy. For me, it had a roughly England-like flavor, but of the story’s various aspects, the surroundings were perhaps one of the less-developed pieces. The Tainted over which the main character has oversight are in every way just as human as the rest of the population, but because they have the ability to use magic, they are treated as lesser individuals. If you think of how those termed as sexual predators are tracked and treated in today’s world, you wouldn’t be far off from understanding what restrictions might be in effect here. The only difference being that in this case, these people’s only “sin” is that they can do something that the majority of the population cannot: use magic.

The story begins in a very dark place indeed, as the corpse of a young girl washes up on the shore of the Brightwash within the town limits. As it happens, Mr. Blackwood is nearby, and although his purview doesn’t necessarily include the investigation of such events, he’s drawn to the girl and her story as much as a bee is drawn to the proverbial flower. Although, the complexity and varied nature of the rest of his life pulls him from the girl and what she represents, it is back to her that his tale eventually circles.

The large majority of this tale is told from the perspectives of two people. Mr. Blackwood, and one of the Tainted to which he has recently been assigned: Ms. Stella Whiterock. They live adjacent to one another. He’s familiar with who she is, and she him. She has a young girl with which Tashué is particularly enamored. Prior to the assignment, they had what might be termed a familiar romance that had as of yet gone nowhere, but those tables are somewhat changed after the death of Ms. Whiterock’s handler, and Tashué’s resulting assignment. Add to this some local politics that are trying to pull Mr. Blackwood into their current, and the difficult situation of his son being one of the non-compliant Tainted that are being held in the local penitentiary, and the story quickly begins to breathe and take on a life of it’s own.

I can’t understate just how taken I was with this book after the first few chapters. It did it’s job *so* well. A solid introduction of the main character, the presentation of the speculative element, an inciting event, and even a solid romantic thread. Add to that some really impressive writing, and I wasn’t just hooked but positively skewered. The author does a really good job of developing not only the world and its characters, but also an innate sense of morality that is specific to the world and it’s peoples. The longer I stuck around, the more I saw that the world wasn’t just the positive and idyllic space that Tashué tries to make it, but that there are much darker and more horrifying aspects to the world and those that rule it, than I could have ever believed. This shift develops amidst the push-and-pull of the relationship with Ms. Whiterock and those that wish to use him for their political endeavors. Slowly, as the story progresses, Tashué’s belief in the things to which he’s devoted his life begin to crumble, and with that comes a change in his views and motivations.

Well wrought, fantastical story that is mostly concerned with romance, but introduces a world that is as dark and violent as the one we know.

Ultimately there were a few things that kept this from being the brilliant read that I’d hoped it would be. The first concerns the concept of expectation and balance. With the given beginning, I was expecting the story of the dead girl to be much more of a driving force that it was. Eventually, the story did pull back around to the girl, but by that time I didn’t really feel like that successfully wrapped up the plot for me. The romance between the two main characters, however, kind of ended up taking over just about everything else. Now, if the story had started as a romance, instead of something that looked more like a dark mystery, I probably wouldn’t have had an issue with it. But as was the case when I read Stephen King’s 11/22/63 (EBR Review), the romance took over a story that had promised to be something different.

The second aspect that watered the tale down for me was the large number of POV characters present. By the end, it felt like the tale that the author was trying to tell just got a little out of hand. There was too much, and too many pieces to present. It was definitely a long read, and so the inclusion of these minor characters, while interesting, ended up diluting the story for me instead of filling it out. For me, there was enough that could have been told from Tashué and Stella’s perspectives to tell a really good tale.

The third issue I had was the withholding of information from one of the POV characters of interest. This is something that always annoys me. As it happens, I think the story could have been much stronger had the actual story behind the character been given up front. That’s just not the way it worked out.

Still, I can totally see why this book did as well as it did in the most recent SPFBO. Lots of strong aspects to its storytelling, great writing, and a complex tapestry of world and character that really made it an engaging read. I fully expect that when (not if) the author gets picked up for traditional publication, we’ll see some tightening and streamlining of this author’s already impressive abilities that will make her books particularly spectacular.

Deals with the murder of, and violence against, young children