Review: We Are Legion (We Are Bob) 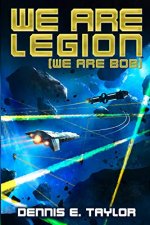 So, yeah. This one is a little older, but between seeing a bunch of references to and comments about this one over the last year or so and then getting a very positive personal reference from a guy at work, I decided to take the plunge. In fact, I went all-in and even bought the dead-tree version. A decision that I am, oddly enough, regretting at this stage of the game. Though I do have to say, this read was a good bit of fun, and seemed to be just the thing I needed in order to take the edge off, after the recent spate of mediocre books I’ve made my way through recently.

WE ARE LEGION (WE ARE BOB), you have to admit at the very least, has a very intriguing title. It’s the sub-title that gets me. Turns my expectations from “a ubiquitous group of many individuals” to “a group of many instances of a single individual”, and at once makes me wonder just what I’m going to find.

Bob is a software engineer and has just sold his company. He’s flowing in the dough, and ready to enjoy life. First order of business is to sign himself up for a head-freezing gig and rest easy knowing that the inevitable death of his flesh won’t be the end. I mean, he has the money to pay for it now, so why not spend a little on the chance? Even if it does go nowhere. Unfortunately though, it doesn’t–go nowhere, that is–and in short order he finds himself on the receiving end of a game of chicken with a speeding car.

Thankfully, the head-freezing company wasn’t a sham, and he wakes up over a hundred years later to find out that all corpsesicles like him have been declared by the government as having no rights. As such, Bob’s intelligence has been downloaded into a computer, his head thrown in the garbage, and he’s been placed into a program that may soon have him racing among the stars.

This read was fun. Probably something that I needed more than I realized. Humor comes in early through Bob’s voice and the funny situations that he finds himself in. He’s a character that is quickly understood, as he is assimilated into the technology of tomorrow and made to perform tasks that those interacting with him want him to do… but that he would otherwise voluntarily do himself, were he free. The thrust of the work that he is to do, is explore space. Along the way, he’ll have the ability to “print” just about anything he wants, including new versions of himself (with humorous naming conventions), probes, weapons, and more, as his wanderings take him ever farther from Earth.

This book is absolutely one I’d call a popcorn novel. There’s nothing much that you have to think about very hard in it. Most of the science is of the hand-wavy variety, but that doesn’t much matter as the problems and concerns that Bob and variants have to deal with are really what keeps the story moving. Most of the funny stuff, for me, was clustered in the first third of the book or so. As it progresses, I found fewer and fewer things to laugh at, but the problems and exploratory nature of the plot still engaging.

Engaging, fast, and entertaining, WE ARE LEGION, is a great popcorn read that reminded me how much fun science fiction can sometimes be.

My biggest disappointment with the book didn’t even have anything to do with the story, but with the actual pages of the book itself, as I found multiple pages simply falling out of their binding as I read it. I’m not one that cracks open his bindings either. I once had an acquaintance return a book of mine he’d borrowed, and he said that when he got it that it didn’t even look like it had been read before, but that it did now. I just about fainted at the sight of the spine. For this instance, I thought about including a photo but just didn’t like the way it looked within the context of the review. Put simply, about 10% of the pages fell out along the way, and I had to keep doing my best to shimmy them back into the cracks where they belonged. Grumble. If only I didn’t love my dead-tree books so much, I guess.

A fun book, but likely not a series that I’ll continue. Well, barring any massive evidence to the contrary that I should stick with it. Worth the time though.