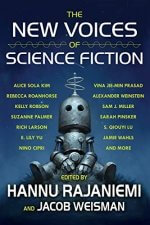 I’ve been looking for something from Hannu Rajaniemi for some time now. At least, it feels like it’s been a long time since I read something from him. Year-and-a-half maybe? So, even though none of the stories in this anthology was by him, I was still pretty excited to read it when it got dropped into my TBR pile. It is, unfortunately, the last bit of short fiction that I’ll be getting to for a while. Nothing else on the near horizon anyhow.

Looking back, it’s almost comical how simple an exercise it might be to delineate the two groups from one another. Overwhelmingly, those that I enjoyed started deep within a character’s perspective, and those that annoyed me started out in 2nd person. Okay, maybe not all of those that annoyed me were written in 2nd person, but all of those that were written in 2nd person absolutely ended up annoyed me. There were also a few others that were difficult to read that usually tried to be overly intelligent and ended up completely striking out at trying to tell an engaging story. A lot of them also ended in a very depressing manner. Although, reading a depressing story isn’t always a bad thing, if it’s a story well-told.

If I’d reviewed these stories individually, I’d have rated them as thus:

For the two on the low end of the scale, it absolutely came down to poor writing. Whether that was because of issues with clarity or poor grammar or randomly jumping around from place to place, the writing just didn’t work for me. Seriously made me wonder why they’d been included here and even been published in the first place. On the balance, there were also three other stories that were absolutely awesome. As I like to focus on the good stories when it comes to reading me some short fiction, I’ll lay down a little love for them here, along with a little something of my favorite from those that I “Liked”:

Strange Waters by Samantha Mills: A fisherwoman is caught within a series of time slipstreams scattered across the ocean near the city where she lived. Once she is caught, she gets lost in time and constantly returns to the harbor from which she left, only at various points in its history and future. In each instance, she keeps her head down, trades the fish she has caught out upon the ocean for the goods she needs to survive and then returns to the water. In this, she wants only to avoid hearing anything of her children. Instead, she wants to return to them, from the year she first left, and be there for them instead of learning what became of them without her. Really good story, and even though I didn’t care for how quickly the woman’s final decision came, this is a story that I won’t soon forget. (Author’s Website)

Openness by Alexander Weinstein: A man is living in the future where we are all electronically interconnected with one another. He has a relationship with a woman that frequently enjoys time away from technology. It ‘experiences/memories/feelings into “layers”, and then choose to expose those layers to others as they so desire. Those without permission to know another’s name can even only see a “screen name”. The story hinges on the relationship between this man and the woman that sometimes avoids technology. Very pretty writing and a lot of interesting ideas. Remember I mentioned that some of the endings were depressing though? This was one of those. It was also my favorite of the stories that I “Liked”. (Author’s Website)

Ice by Rich Larson: A kid living on an ice-covered planet sneaks out in the middle of the night to watch some whales breach through a patch of thin ice with a pack of the local tough kids. His biologically modded little brother tags along. Great story about the brothers and their relationship while passing on the wonder and majesty of living in that foreign world. My second favorite of the bunch. Also, as of the publication of this review, it’s available on Clarkesworld to read for free. I found the link to it through the author’s website. (Author’s Website)

Our Lady of the Open Road by Sarah Pinsker: A woman and the band that she sings for is touring the countryside, playing for local fans and trying to make a living, but utterly failing in the attempt. Many bands have turned to a large tech company to relay holographic projections of a band’s concerts to literally everywhere in the entire world. To bring in more customers though, the tech company will fill the actual crowds gathered around the band with “planted fans” to enhance the recordings. The POV hates the very idea of this and is doing her best to avoid caving in despite the financial difficulty they’re going through. She just loves the feel of actual concerts way too much to give it up. Typically, I find myself disappointed with stories where the focus concerns music. This one, however, was absolutely brilliant. My favorite of the group. And apparently, the author just published her first novel last year. Totally going to chase it down. I’d suggest you do the same. (Author’s Website)

An anthology of Science Fiction stories taken from new authors in recent years. A good group of the most impressive and most annoying aspects of the genre.

So there we are. My favorites of the bunch. Anyone else read any of these? Not necessarily from this book and not necessarily just my favorites. Would be interested in knowing what you thought. As an aside, as I was wandering around Sarah Pinsker’s website, I noticed that Alastair Reynolds — one of my favorite authors — mentioned the story, when it was originally published, as being his favorite of those included in the publication. I’d dare say he has some pretty good taste too.

Openness by Alexander Weinstein
The Shape of My Name by Nino Cipri
Utopia, LOL? by Jamie Wahls
Mother Tongues by S. Qiouyi Lu
In the Sharing Place by David Erik Nelson
A Series of Steaks by Vina Jie-Min Prasad
The Secret Life of Bots by Suzanne Palmer
Ice by Rich Larson
One Hour, Every Seven Years by Alice Sola Kim
Toppers by Jason Sanford
Tender Loving Plastics by Amman Sabet
Welcome to Your Authentic Indian Experience™ by Rebecca Roanhorse
Strange Waters by Samantha Mills
Calved by Sam J. Miller
The Need for Air by Lettie Prell
Robo-Liopleurodon! by Darcie Little Badger
The Doing and Undoing of Jacob E. Mwangi by E. Lily Yu
Madeline by Amal El-Mohtar
Our Lady of the Open Road by Sarah Pinsker
A Study in Oils by Kelly Robson