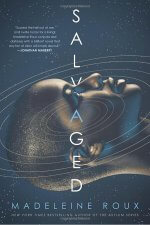 Sometimes I think it surprising that a good cover quote by a published author can still sway my opinion on whether to read a given book or not. I mean, I’d like to think that EVERY cover quote would be legitimately honest and portray the full feelings of the one giving the quote, but there is this very pessimistic side of me that has been shoved into the advertisement and marketing niche for too long to believe that this is completely true. The cover quote on this book definitely caught my attention, and pushed the book to the front of my reading queue after I’d checked out the first couple pages and found it readable. To a limited extent, I can say that I agree with what the cover quote had to say. But I also felt like it was somewhat skewed to represent only one of the best aspects of the book and not the book as a whole. Which kind of goes back to my point. But I digress. There was plenty in this book to enjoy… and to be frustrated with.

SALVAGED (Amazon) is the most recent book from Madeline Roux and seems to be a departure from her typical genre. Most of her previous books look more like they belong in the fantasy/horror genre. Still, I guess a jump to science fiction horror isn’t that far to go. Still horror. And absolutely still speculative, which means she hasn’t gone to the dark side or anything. 🙂

Rosalyn Devar is a young woman trying to run away from her rich and influential family. After leaving a stable career in bioengineering due to a violent, sexual attack by a respected colleague, Rosalyn finds her way into the shoes of a “space janitor”. She flies around the solar system cleaning up messes left on space ships where things have gone wrong. Our introduction to her and the new job comes with her vacuuming up corpse sludge, on her birthday, doing her best to quell the overwhelming desire to drown herself in alcohol. These janitorial jobs aren’t necessarily big to dos. Teams typically consist of three or four people, all crammed onto a small boat full of equipment. The economy of business is efficiency, or so they say. At least, they should. These small teams travel out to the ship, clean up the mess, salvage anything left over and ship it back to corp. Her next job comes up quick, but the setup is really odd. Not only does she get some cryptic orders from a guy up the command chain, but the third member of their three-man team isn’t even available. So it ends up just being her and this creeper she’s worked with a time or two before. But she doesn’t have a choice about taking the gig. Poor choices seem to hound this poor girl. Which is too bad. Because the proverbial stuff is about to hit the ever-present fan.

I really liked the beginning of this book. First seventy pages or so had some decent writing, some great character and setup, and had me smiling more than once at what I could see coming down the pipeline. Girl had some trauma to deal with. Some solid inner conflict that she wasn’t handling too well, but still coping. Outer conflict came up fast. Was easily going to be a solid Like of a rating. If it had a killer ending, I could even see it creeping up in to the Love zone. The thing that killed it all for me was when she finally made her way onto this second ship, the Brigantine, to salvage what she could from it, and suddenly every character still alive on that ship started getting POV time.

The back cover mentions the fact that the crew have had their bodies colonized by some sort of parasitic alien, which as a concept could be pretty cool, if it was handled well. But instead of going full on horror when she steps onto the ship, and giving her and the reader no idea what’s happening, we jump into every crewman’s head and can immediately tell that Rosalyn should only be mildly concerned. Not only does this remove the freakiness of what has happened to the crew, but it spreads the story out so thin that Rosalyn’s journey is lost in the mess of every other character’s life. Arguably, the captain of the ship plays the strongest role in the main storyline, but instead of him and Rosalyn trying to figure things out, they spend a lot of time developing a relationship that totally didn’t make sense to me. I mean, dude has glowing blue eyes and has been taken over by some mind-controlling alien. After her history with men, just in general, there’s no way she’s hooking up with this guy. And yet.

SALVAGED is a story with both too little and too much character and tells a science fiction story that decides too late it wants to be horror.

Then, after a large majority of the story is spent rolling around the ship and dealing with some of the more unsavory aspects of a few of the crew members, THEN things go all horror-tastic, as they deal with the source of this alien menace. This was the point at which I could tell that the author actually had some chops at this writing gig. Within the single viewpoint of Rosalyn, this story absolutely got more than a bit freaky. I really wish that it’d grabbed that horror vibe considerably earlier though, and then run with it. Thing is, I can totally tell that the author very likely has the ability to do that story right. She just needed to focus it and hit that main thrust early on, and this could very well have been something more akin to Alien, to which it was compared in the cover quote, than it ended up being.

Despite being let down by this story, I’d totally read something from this author again. I think she has the capability within her to tell a great story. Will be interested in seeing what she brings to the table next time around.