Review: Chains of the Heretic 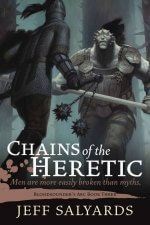 A while back I decided to finally listen to our reviewer, Nick, and picked up SCOURGE OF THE BETRAYER (EBR Review). His review of that one (forever ago) was blisteringly positive, but for whatever reason I didn’t immediately put it on my list of books to read. When I got the book in the mail, I was somewhat bemused and slightly disappointed by its apparent size. Quite small. But then again, the book had been relatively inexpensive to begin with… in fact, as of the writing of this review, the paperback is only $5. Whoa. If you haven’t read this book yet, you totally need to go out and buy it. Like now. For five bucks, it’s worth taking a chance on an author that you’re sure to enjoy, if you’re a fan of the authors we praise here at EBR. Link at the bottom of the review.

For those of you that already know the greatness of the first, read on.

CHAINS OF THE HERETIC (Amazon) is the third and final book in the Bloodsounder’s Arc, and I just love the fact that they didn’t call this thing a trilogy. Ha! It lands solidly in the Swords & Sorcery genre but has a lot of military themes within it as well. All of the books have been greatly accessible in terms of world building and history because of its main character: Arkamondos, typically called Arki. Or Arc. Or, slightly more callously, Scribbler.

Arki had a relatively soft life before Captain Braylar Killcoin hired him as scribe, archivist, and translator, to travel with his band of soldiers as they sought to undermine the country in which Arki lived; their previous archivist having met a rather… inauspicious end. Arki’s changed much since that time, and they’ve traveled much, but at the end of the previous book they’d been chased out of Sunwrack, the capital of the mighty Syldoon empire. Really, they had to fight their way out, after realizing that the new emperor, Cynead, wasn’t going to make things easy on them. Instead, Captain Killcoin and those beneath him fled the city in search of the deposed emperor, Thumarr. The story in CHAINS picks up from there, quickly after the close of VEIL OF THE DESERTERS. It isn’t long before they’re forced up against the Godveil, a boundary that has no other purpose but to persuade them to walk into its grasp and kill them, by pursuing Syldoon and they have to make a desperate and risky choice to avoid being killed by their brothers.

For two books now, the author has hinted at the history surrounding the Deserters. The gods of old that left the world and put up the lethal Godveil to keep anyone from following them. There have been hints as to what these things might looks like — the heads of Captain Killcoin’s flail for one — and the book cover makes such suggestions much less hypothetical. Here though we finally get a chance to see who and what the Deserters are, as the characters we’ve been following through this series allow us to follow them through the Godveil.

One of the greatest strengths of this series has been the character of Arki. Nick mentioned the same in both of his reviews of this series. He is a character that is so anathema to and ignorant of the world that the Syldoon take for granted, that the dichotomy that plays between him and the rest of the soldiers and their leaders is constantly packing punches for we the readers. Not only is Arki new to everything, and reluctant in situations where Captain Killcoin is almost nonchalant, Arki becomes more and more like those around him. From his first opportunity to save the life of an unknown guard, to the first time he kills another man (nearly haphazardly) in the midst of battle, he’s becoming more attuned to the life of a soldier and the realities of war.

The really great part of Arki’s character, however, is the very integral part that he plays within the story itself. Even though it is Captain Killcoin and the soldiers that make their way through difficult situations, and that drive the main thrust of the plot, it is only through the character of Arki that any of them have any idea what they need to do. Arki’s main job within this small band of soldiers is to translate the ancient records that they’ve collected, and also do his best to not get killed along the way. He frequently tries to fail at the second, sometimes of his own accord, as he continually tempts the patience of Captain Killcoin. In fact, the only part of the story that really lagged for me at all came after the point where Arki no long had any records left to translate, and it almost felt like, for a short time, he became a “camera character” through which we only watched the story unwind, instead of lived through his eyes.

Salyards’ strength of prose also continues to shine through Arki in this book. It is an interesting world that the author has built here, with every character within the dark and fairly grim world are all quite learned. Between the Syldoon’s lifelong training and Arki’s understanding of languages, the array of individuals spread throughout these pages gives Salyards a field rife with opportunity for showing off his own command of language. And he does a great job indeed.

In terms of being a series-ender, this book was pretty decent. Not stellar though. Still, it gets my vote as being completely worth the read. It just didn’t feel quite complete is all. Or maybe as wrapped-up as I wanted things to be. There’s definitely a LOT left open, and Salyards could definitely return to this world and it’s characters and likely tell another brilliant story about the Syldoon and the Memoridons and the Deserters. I can see room for more anyhow. And I’d definitely be willing to take that trip with him.

Arki, Captain Killcoin, and the rest of the mighty Syldoon come up against their most intimidating foes yet: a deposed emperor and the vicious Deserters.

Salyards has crafted for his readers, a story that is personal and epic and fantastic, all. It kind of blows my mind that this series was so good, given the fact that SCOURGE OF THE BETRAYER was his debut novel. The really cool thing about coming into this series at this stage of the game, is that it’s been about two years since CHAINS OF THE HERETIC has been published. So another awesome book by this guy has to be just around the corner.

Can’t wait to pick it up, Jeff. Bring it on.