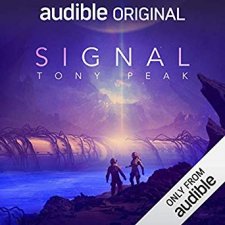 A couple weeks ago, a public relations specialist from Audible contacted us about possible interest in reviewing a new book slated for immediate release. Publishers contact us quite frequently to review their books, but this was the first one that I could remember coming directly from Audible. The book was Science Fiction, so naturally I picked it up. What with me loving Science Fiction and all. 🙂 My first surprise of many came when I found out that this book wasn’t going to get any kind of print version. Meaning no physical book and likely not even an ebook. This understanding gave me the immediate feeling of a very tiny dagger stabbing me in the heart. How could someone do that to a story? Especially if it’s a good one. I mean, doesn’t everyone love the feel and the smell of the paper? The heft of the bound pages? Don’t get me wrong, I enjoy a good audio book (Simon Vance is a voice-talent god). I listen to them quite often actually, so I felt fairly qualified to give Signal a go. Thus, I dove in.

And that’s when I got my second surprise.

SIGNAL (Amazon) by Tony Peak is a pretty short story, all told. Along with my copy of Signal, I also got a gratis copy of “Speaks the Nightbird” (EBR Review) for creating my account, and comparing the audio length of the two recordings puts Signal at somewhere around 250 pages. If it had been printed. Which it won’t be. (I’m still kind of miffed about that, but no hard feelings. Really. Go on now. Nothing more to see here.)

The story, such as it is, revolves around several characters that are part of a 40-person team, sent to a moon in the Alpha Centauri system, from which the Earth has received a communication signal. (“Signal”. Get it?) After a four-year trip in stasis, their ship finally arrives, but events quickly spiral out of control as everything seems to start going wrong.

DISCLAIMER: I’m sure that lots of people spent lots of time on this audio book, but the fact of the matter is that it just wasn’t very good at all. I’m sorry, but that’s not my fault. I’ll try to be gentle while still being thorough.

The Amazon page has this title listed with four separate voice-talents. This is where my second surprise came in. Because the narrators weren’t handled like I expected them to be. The story is told through three main methods. The first is through regular prose. All of this was handled by a single voice talent. The remaining three voice-talents handled the other two methods. The second came through recorded “journal entries” of various characters, and the third through semi-dramatized “flight recordings”.

The first piece of the story that we get is one of these “flight recordings”. If you think about what a flight recording is, it’s either really quiet… or a bunch of people talking with little to no context for who is talking, or to whom they are addressing their words. It’s confusing and a bit disorienting, but thankfully pretty short. Then the story transitions over into prose. That transition was pretty jarring for me though. Both the first time, and every other time that the story did it. And it switched between these methods a lot. Like pretty much every chapter has at least one instance of each of the three methods in it.

The story as a whole was really difficult to enjoy. The “flight recording” episodes sounded like Star Trek TNG if it had been recorded in an empty warehouse (think echoes), and the characters involved had literally no structure or discipline to them. Chances of this happening on a long-term mission to outer space? Nil. They also tended to say things out of context — because otherwise it would have pretty much been impossible to understand what was going on — which just made it seem hoakey and corny and a couple other kind of -y’s that I can’t seem to think of right now. The “journal entries” were almost worse, as they’re filled with even more egregious non-contextual dialogue. Doctors defining their own familiar acronyms, characters giving past history between themselves and others, and even some blow-by-blow action scenes. I mean, really?

Characterization is pretty much non-existent. Even the journal entries failed to provide any real detail about those that get covered, which surprised me again (#3). I mean, they’re journal entries. Don’t people naturally pour their hearts into their journals? Not here apparently.

Even aside from all of the poor story-telling techniques used (of which there are legion), I could have probably forgiven SIGNAL and upped my rating to “Didn’t Like” if the story had been solid. But it was riddled with absolutely mind-boggling events. The crew is in sleep stasis for 4 years, and then they’re woken up and two hours later expected to pilot the ship into orbit? Highly doubtful. Who came up with that plan? Then they crash on the moon (Surprised? No, not really), and instead of worrying about their survival, the science team goes out into the surrounding desert, finds a “vine” there, and dives right into analyzing it. “This vine could have sent the Signal”! Uh, what? Everyone from the mission is so radically different from one another, that instead of working together to figure anything out, they all just end up fighting and arguing with each other for half the book. Huh? Who would have ever put these people together? No one, that’s who.

Speaking of, that was something else that totally didn’t make sense and surprised me yet again (#4). In the group of characters that survived, we had a ridiculous amount of diversity. White, black, asian, islander, arab, croat, russian, gay, straight… they’re all over the place. And of course male and female, but that part wasn’t all that surprising. There was never any semblance of a team. (Though a couple of them do stop for a while to get some lovin, because that’s exactly what every space story needs.) There was never any glimmer of discipline. There was never any focus on what seemed alarmingly obvious to me that individuals in such conditions would focus upon. In fact, one of their own was sent to kill everyone else! And no, that’s not a spoiler. Her character comes into the story very early on and she’s up front about what she’s doing.

By the time the alien life shows up, the team has almost completely decimated itself, and I was actually left confused as to whether it was even “real” because by this time everyone has been hallucinating and having nightmares all over the place. It was utter confusion and frustration from the get go, and didn’t let up until the very end. Where we get an info dump about the aliens and their motivations.

Seriously. The climax of the book… is an info dump.

Audible attempts publishing a book only available on audio. But is this new venture SIGNAL worth the time? Science fiction without coherence.

In the context of other audio books I’ve read, I’d place this one on par with a straight-to-dvd movie when compared to one with a theatrical release. Story-quality and all. No wait. It’s more like a straight-to-vhs movie recorded on a cassette tape as compared to a movie with a theatrical release. (You old-timers ought to get a kick out of that one.) Hmm. That comparison wasn’t very gentle. Sorry. Kind of. I’m just too big of a fan of apt comparisons to not include it.

*** I do have to say though that the Audible app was pretty impressive. Super simple, worked great every time I went to listen. I’ve had frequent issues with the two audio book apps that I use to pull books from my local library, and so seeing what a really good audio book app could be was refreshing. Kudos to Audible for that.

(Edit: 12/26/2018) The story was re-recorded and re-released since I wrote this review. Likely as a result of the initial feedback the item received. Thus, any comments I’ve made in my review about the sound of the recording may no longer be applicable. I wasn’t willing to re-listen to the new recording though, and find out for myself. If you’ve listened to the new version, feel free to comment about it below.

(Edit: 02/08/2019) Apparently they’ve published a printed version of the story. This page has been updated to reflect that.