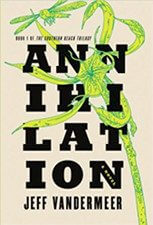 I really like the trend I’m seeing of speculative fiction comprising a larger portion of the movies and tv (streaming?) shows in production today. In fact, the whole reason I picked this book up was because someone was making a movie out of it, and the trailer totally pulled me in. Got another book in my stack right now with a review waiting to be posted, that I picked up because of the same kind of media inspiration. Netflix has just been upping the game. If I’m honest with myself, most of the new movie/tv speculative goodness seems to be coming from, or associated with, them. Granted, not everything. But lots of it, yeah? Have you been keeping up on your “Coming Soon” trailers and news buzz? Might just be time that you did that. After you read this, of course. What were you thinking?

ANNIHILATION (Amazon) is the first novel in the Southern Reach Trilogy by Jeff VanderMeer. I was actually kind of surprised to find out how recently it had been written. 2014. In fact, all three of the books in this trilogy were released that same year. Even for how short they are, that’s pretty impressive to get three books out in a single year.

The story follows a four-woman science team that enters a restricted coastal region of the United States referred to as Area X. They have been briefed that they are the 12th team to do so, and that none of the other expeditions turned out very well for the…expeditioners. The Biologist, whose story this is, had a husband that was part of the 11th team. The other three women are only ever known as The Anthropologist, The Surveyor, and The Psychologist.

The story is told through the field journal of The Biologist, but that felt kind of tenuous to me because of the inclusion of actual dialogue. Still, this guy writes quite well, so I was willing to be pulled along. And pulled along I was. The scenery and atmosphere are great. Right from the beginning, we know that something is going to go wrong, as surprises abound and tensions run high between the individual members of the team. The more the team explores and discovers, the more everything comes unraveled, as each team member, the history of these expeditions, and the strange and wonderful Area X itself all reveal their individual secrets. Even The Biologist, the POV from which the story is told, withholds information from we the readers for quite some time. And that annoyed me a little bit, but I was willing to swallow it for the duration of the book.

The largest problems I had with the novel began with the setup. As I learned more about what each of the women on the team had been told prior to embarking on this mission of theirs, I became increasingly confused as to why anyone, given the information that these women had been given, would have volunteered to go in the first place. Let alone scientists, which on general principles should be more intelligent than the average Joe. Or Sally, I guess it would be in this case. The scarcity of information, the amount of restrictions set upon them, and the outright refusal of the company that organized their little shindig to answer any questions at all would have been enough to send most people I know packin in the other direction. And even though I’m a rocket scientist, most people I know aren’t any kind of scientist.

The second large issue I had with the story was that this book really only feels like the first third of an actual book. There’s no portion of the story that is tied up to any satisfactory level. And actually, the ending mostly left me confused as to what exactly had happened, as it got really metaphorical and wishy-washy with its descriptions. I was completely unprepared to find the words “The End” when they came, and after what had to have been the climax of the book, I was left with a single word floating through my psyche:

ANNIHILATION is a contrived sci-fi thriller about a female scientist whose mission is to survey Area X after twelve other groups have failed.

As a follow-on to my discussion about the movie adaptation of this novel, I might mention that I read somewhere that the production house had decided to sell off all international rights for the movie to Netflix following the US theatrical release. First time I’ve ever heard of that happening. Makes me wonder what I’m in for, when I finally get to watching the movie. I’ve actually heard from a few that it’s pretty good. From others, that it took the basic ideas of the book and launched off on its own tangent for story material.

Regardless, there wasn’t enough in the book to make me want to continue the story in the slightest. So at this point in my Annihilation experience, I’d say to perhaps try the movie. Or maybe just wait to see what everyone says about it first. But the book isn’t anything to crow about. Not bad. Not great. Just…meh.