Review: The Empty Ones 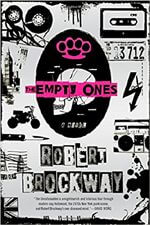 So I was reading a book with my daughter the other day and she skipped half a line, mid-sentence. There were two “ands” in a single line and she went from one “and” to the other “and” without a beat. Just kept reading without realizing what she’d done. So, I called her on it. “How in the heck do you even do something like that?” I wondered aloud. We both had a good laugh over it. It was only considerably later that I realized while reading the book for this review I felt EXACTLY like I had when my daughter had skipped half the line while reading: like I was missing a ton of story that should have been there, but just wasn’t. No surprise on the rating then, eh? Yeah. This one was kind of a rough go. Okay, maybe not kind of.

THE EMPTY ONES (Amazon) is the second book in the VICIOUS CIRCUIT trilogy by Robert Brockway, and it’s probably one of the most confusing novels I’ve read all the way through in a good long time. After finishing its predecessor, THE UNNOTICEABLES, I was fairly uncertain as to whether or not there would be a sequel in the offing because everyone seemed to be relatively okay at the end.

Apparently they weren’t though. So, we needed more. That’s where things get messy. Yeah, right from the get go.

The first book was mostly from the perspectives of two people in two different timelines that eventually merge into a single cohesive story. Nice. Simple. Kaitlin and Cary are still around in this next book, but into the mix are thrown at least four other characters, some of which are new, and some are secondary characters from UNNOTICEABLES. If you’ll remember, the perspectives in UNNOTICEABLES were both first-person. “I did this”, “I did that”, sort of thing. This time…they still are. All of them. And just because having (a minimum of) six point-of-view characters all speaking in first person isn’t insane enough, each chapter jumps to different points in time. Even different points in time for a single character. Forward AND backward, as the pages continually tick forward only. It’s like this massive spaghetti pie of people and time traversing this big empty desert, chasing a bunch of monsters that are out to kill OTHER people (not even the main characters anymore) because, well, there are a bunch of monsters out there and someone has to go kill them. Right? Right? But we still have no clear idea about how any of the monster setup happens, or why it happens. Well, until finally, at some point past the middle of the book, our “heroes” run into a group of organized homeless beer guzzlers (I’m pretty sure that every person in this entire novel recklessly guzzles beer to excess…) that also happen to be chasing after the monsters, and they know a little something about the way they work. Popping up every 27 years, or something, and wanting to “solve the bad equation” of each person’s humanity. Honestly, I couldn’t make heads or tails of the stuff, and then when the characters started mixing the self-proclaimed names each of them had for the individual types of monsters they were fighting…that’s about the point I wanted to bail. I mean, seriously. I can’t even write a mildly coherent explanation of the story without it turning into a massive mash of mess. Just look at this paragraph! It’s a meandering, rambling disgrace!

But if there’s one thing this novel does right, it is that it screams toward the ending of the book with reckless abandon (and reckless beer guzzling)… completely heedless of the fact that there’s no real plot or reason for anyone doing anything that they’re doing. It’s flash, and boom, and bang, and wow, and doing its best to never let the reader stop and actually think about what’s going on. Because if you do that, the story is seriously screwed. So, more profanity, and more violence, and more peril, and even the characters are doubting themselves when it comes to coming up with a reason as to why they’re doing what they’re doing. I mean, when writing such a novel, there has to come a point when, as an author, you have to start worrying about yourself when your characters are telling you directly that they have no motivation to continue on with the plot of the story.

Dang. I haven’t even told you what the plot of the story is yet, have I? Um, okay. So essentially it’s this: “Carey and his buddy Randall go to England to chase down the baddies they know about, and Kaitlyn chases down Marco (escaped baddie from the first book) to try to kill him again”. There. Now you know what happens. If not why. Good luck if you’re going to try to figure that one out.

A holy swiss-cheese of a novel, with scant scenery, a felonious lack of focus, a paucity of plot, and no real reason why anyone should read it.

When I first read the cover quote for THE UNNOTICEABLES, I thought it was pretty humorous. Something about the book being a tour through modern-day Hollywood and the 1970’s drug scene. I thought it funny because when a quote has to fall back to saying the scenery in your book was good…that can’t be a good sign about your story or characters. Yeah? But granted, that first book did show a lot about those two settings. Unfortunately, EMPTY ONES fails to even have that. There’s so little scenery and surrounding that it almost felt white-box. LOL! I’m sorry. I just read the cover quote for this book and… it’s the same one from THE UNNOTICEABLES. Well, at least that one had some scenery. So whatever sells the new book, I guess. Marketing 101: if it ain’t broke, don’t fix it.

This one is a holy swiss-cheese of a novel, with scant scenery, a felonious lack of focus, a paucity of plot, and no real reason why anyone should read it unless they’re interested in taking a romp through the author’s diseased mind. My mind, however, is diseased enough to blithely volunteer for such endeavors. So, just like my little niece always says to everyone else when she’s done putting up with their shenanigans: No thank you.