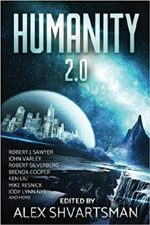 This one comes as yet another in a long line of short-story anthologies that have fallen into my lap. Most of the others up to this point have been fantastical (urban, heroic, horrific), but this one instead is of the science-fictiony variety. More specifically, it tries to deal with how humanity might change when, not if, interstellar travel becomes possible. Was hoping for some goodness out of this bunch of stories. Unfortunately, I didn’t find much.

HUMANITY 2.0 (Amazon) is an anthology of fifteen science fiction short stories edited by Alex Shvartsman. In general the stories are relatively short and all deal strongly with science fiction elements. I felt like somewhere around two-thirds of them had that base science fiction element as something to do with humanity changing because of interstellar travel, which was nice to see as that’s what the anthology is supposed to be about. But that left about a third of them that had central ideas NOT dealing with this change, but about something else entirely. Although, some of those did mention space travel.

Overall I had a pretty difficult time reading these stories. Nearly all of my frustrations dealt with what I feel are poor story-telling techniques. Lack of characterization; lack of solid character motivation; lack of an impactful ending or just quitting somewhere amidst the miasma; poorly thought-out ideas; too much boring stuff.

As per my usual, here’s a breakdown of where the stories sat if I would have rated them individually:

Usually I like to highlight my top three or four favorite stories, but as I can’t stomach the thought of talking about two stories I thought really mediocre, I’m going to change things up a little this time. So.

“The Iron Star” by Robert Silverberg: This one, unlike any of the rest, was pretty hard science fiction. A man on a ship sent by a big Earth corporation conglomerate is supposed to harvest some mass from a neutron star. Things get complicated when an alien ship shows up and tries to communicate with them. This one was serious good, but no real surprise as this is Silverberg. Deal.

HUMANITY 2.0 tries to deal with how humanity might change when -- not if -- interstellar travel becomes possible. On the whole, not very entertaining.

“The Homecoming” by Mike Resnick: A man tries to talk to his son, who turned himself into an alien 11 years ago, after the boy comes home to visit his mother that is slowly dying from Alzheimer’s. After the man and son fight a lot, dad allows the boy to talk to his mother. Although it could have seriously benefited from some internal POV time from the father (instead of the typical Resnick description and dialogue), the ending is nearly perfect. Yeah. Kind of surprised me.

And my least favorite stories were:

“Star Light. Star Bright” by Robert J. Sawyer: A man that has spent his entire life living inside a Dyson sphere realizes that once outside the sphere his son can see stars. All maid-and-butler dialogue (two people having a conversion about things that they already know everything about) and encyclopedia-like excerpts. REALLY bad. Ugh.

“A Lack of Congenial Solutions” by Kenneth Schneyer: Aliens choose to exterminate the human race because humanity doesn’t know how to not be a virus. Prose consists of free-form unrelatable poetry, excerpts from personal human histories, and excerpts from alien symposiums on the “human problem”. Blech. My exact thoughts after finishing it were, “I want to tear this story out of the book and burn the pages.”

Absolutely not a book that I’d go out and buy, but then again I’m not the biggest fan of sci-fi. If you can deal with the fact that so many of the stories are about presenting a fascinating idea to you in quasi-story form INSTEAD of telling an actual story, you might be good with this one. Pick your own poison though, I guess.