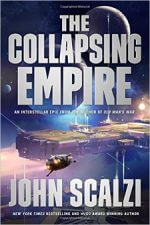 There’s something comforting about reading a series, isn’t there?  You get to come back to situations and characters you’ve already met and fell in love with (at least I’m assuming you fell in love with them, otherwise, why continue reading the series?).  It’s like wrapping yourself in a warm blanket.  On the other hand is the excitement of something new.  One of my favorite things of the Sci-fi/Fantasy genre is coming into a book and that opening, those first couple pages/chapters where everything is starting to take place in your head.  You start building a framework of this new world, these new people, this new story.  It’s fantastic (no pun intended).  For the last 15 years or so we’ve been getting Old Man’s War books from John Scalzi and then occasionally another standalone novel thrown in.  But the standalone novels have always been stand alone (I know that he had/has plans for more books in the Lock-in world and the Android’s Dream world, but we haven’t gotten those yet have we?).

Now for the first time in awhile we have a brand new universe for Scalzi to play in.  A whole new setting that will span at least a few books.  And while his other books have stood alone each telling their own stories and wrapping it all up, this one, THE COLLAPSING EMPIRE, is certainly just the beginning of a series.  There are a few minor things that get wrapped up, but the major stories, the major events are still very much open and ongoing.

So what’s going on?  I’m glad you asked.  There is a massive human civilization spread over numerous planets all connected by something called “the flow.”  Faster than light speed travel is impossible, but using the flow (which nobody really understands how it works or what it is) we can travel between these planets.  The problem with the flow is that it isn’t constant.  Hundreds of years ago an entire planet was cut off from the empire because the flow shifted and left the planet stranded.  Now it looks as though the flow is going to shift again, possibly cutting off every planet from each other.  The story revolves around three people who are becoming aware of this situation and what they can do to, if not stop it, at least ameliorate some of the approaching damage.

So let’s get down to it.  The good and the bad.  The good: Scalzi’s writing as always is snappy and fun and just effortless to read.  I found myself finishing the book in just two days (and they were two pretty busy days, on a light day I would have finished it in one).  The dialogue is fun and engaging.  The characters and their interactions are just a blast to read and you find yourself turning one more page, reading one more chapter to see what happens next.  The also good: The plot and machinations of the story.  There are factions and teams and alliances and betrayals and schemes galore.  There are feints and counter feints.  It’s odd thinking back on the book now, but there really isn’t much action to it.  No huge major space ship battles, or massive fight scenes (there’s a fun mutiny at the beginning of the book), so for the most part the action that happens is verbal sparring and out-maneuvering.  Often times a character is presented with a problem only to solve it by wits and threats rather than violence and it was just as engrossing.

If you're a fan of Scalzi's writing, then THE COLLAPSING EMPIRE is a very good example of his writing and storytelling... and then some.

Ok, the bad (in my opinion): the fact that it is meant to be the start of a series.  Now I really don’t have much problem with starts of new series (I love them in fact, read the beginning of this review) but this one especially felt more like a prologue than a true book in its own right.  I got a taste of the world, a taste of the characters and that was it.  Was it a good taste?  Yes.  Do I want the rest of the meal?  Yes.  Do I want to wait years for it? NO!  The other problem I had with the book was the fact that one of the characters was extremely vulgar.  I understand this is something is in several modern books (books I have read and love by the way) and it’s gotten to be a trope to have someone who is just poetic in their profanity.  Me, myself, I would prefer it to be left out.  I think you can still get a very rough around the edges character without the use of quite so much language.  Like I said, that’s just me.  The last thing, and again this could just be me, is that I’m used to some really fun aliens in Scalzi’s work, and I found I missed the aliens.  All the characters are human, all the technology is human, and darn it, I like aliens.   Like I said, it’s a small thing, but if you’ve read Scalzi’s other work and expected some alien tomfoolery I don’t want you to be disappointed.

Overall, like I said, I’m sold on the full meal.  I’ll buy the next book when it comes out eager to dive right back into a new fascinating world.  I want to see what happens next.  If you’re a fan of Scalzi’s writing, then this is certainly right up your alley and then some.