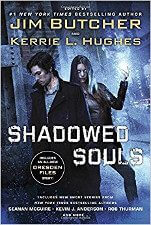 When I saw that this anthology had a new Dresden story in it, I snatched it up quick and then found myself regretting the decision. Because, you see, I’m kind of still catching up on that freaking amazing series, and it only took reading the blurb on the back of the book to determine that this story takes place at a point in time significantly later than my current location in the series. Had the story been by anyone other than Jim Butcher, I likely would have canned the project and either handed the book off to another reviewer or not read the story before reviewing it the anthology myself. But the thing is, The Dresden books have been absolutely genius to read, and even though I like the twists and turns and revelations in that series a ton, so much of the story comes by living it through the experience of reading. And so, already somewhat spoiled, I committed to reading the Dresden story with the understanding that getting from where I am in the series to where this story takes place was still going to be awesome-sauce fantastic. Oh, and there were some other stories in this book too. Even some really good ones. 🙂

SHADOWED SOULS (Amazon) is an anthology of short stories headlined by Jim Butcher, Seanan McGuire, Kevin J. Anderson, and Rob Thurman involving those characters and concepts that play across the line of good and evil, light and dark. Kerrie L. Hughes and Jim Butcher edited, and I think they did a brilliant job of picking some amazing stories that filled out this anthology quite well.

In general, the stories are of high quality and high caliber, with solid characterization, great writing, and tight plots. Of course, there were some that I liked more than others. Across the board though, I was impressed with what I found. Had I rated the stories individually, I would have given out:

Although the Didn’t Like was probably more a matter of personal taste, and not much to do with a lack of the details I mentioned above. Overall a solid anthology of stories of the urban fantasy realm. My favorites were:

“Hunter, Healer” by Jim C. Hines: A twin-souled girl gets told by her adopted father, whom she hates, that another twin-souled individual is stalking her and they should try to kill him together. She doesn’t trust him. Sense of magic setting is kind of chaotic and spread out into the world in different ways, almost completely the opposite of something like Sanderson’s rules. Brilliant story. I need to read more Jim C. Hines.

If you're a Jim Butcher fan, SHADOWED SOULS is worth buying for the Dresden story alone. Most of the others are worth the price of the ticket as well though

“Sales. Force.” by Kristine Kathryn Rusch: A magical assassin lost her fiance to a car accident. She’s distraught. She gets offered a job to feel out a potion-seller that is offering a potion that will allow a person that has been seriously hurt by another person to love again. Kind of a setup, but I liked what this story did. A lot.

“Sleepover” by Seanan McGuire: Half-succubus is kidnapped by some kids to rescue their kid sister from some boogeymen. The story didn’t revolve around a fantastical element (just lots of fantastical beasties ) and that kind of bugged me, but well-written and engaging like nearly every other story of hers that I’ve read.

“Cold Case” by Jim Butcher: Molly Carpenter is tasked by Mab, the Winter Queen, to collect a tardy tribute from a group of winter fae living in a remote village in Alaska. Everything goes to plan, but she learns a few very important things along the way about both herself and the Winter Court. Absolutely stunning. Actually read this story last, despite the fact that it’s bound first in the book, and it elevated my opinion of the whole anthology because of how great it was. Soooo awesome.

I don’t know if I can understate just how much I enjoyed the Dresden story. Just… yeah. The book was a fairly quick read. Most of the stories short and straight-forward. I think author-hopefuls could learn a lot from reading an anthology like this one as each story does so many things really well. Lovers of urban fantasy should definitely pick this up, and if you’re a Dresden fan…just buy the thing, yeah? This is one that you absolutely don’t want to miss.