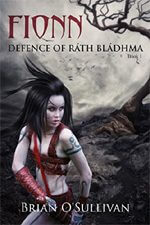 Bodhmhall’s little settlement is in trouble. Established three years ago after being expelled from her clan, the settlement of Ráth Bládhma is home to a handful of misfits, simply trying to live a quiet, fulfilling life in the wilds of Ireland. But one fateful day, Bodhmall’s pregnant sister-in-law Muirne stumbles into their settlement with news of the old clan’s demise–and she carries what could be its heir. Will the competing clan come looking for her?

When Bodhmhall’s partner Liath Luachra comes across tracks in the forest, she discovers a war band in search of something…or someone. As she tracks them down to learn their number and purpose, she finds that they’re aided by a Tainted One–what happens when a druid turns to darker forces–and suddenly their plight becomes much more fraught.

***WARNING: HERE BE SPOILERS*** Usually I don’t give away the story, but I feel the need to explain myself.

I happen to really enjoy historical fiction — see my review for THE LAST KINGDOM EBR Review — and the author of FIONN, Brian O’Sullivan, explains in the beginning pages of the book that the story is based on historical texts he’s studied about an actual siege in 192 AD in a place called Ráth Bládhma in Ireland. The result is what’s obviously a well-researched novel with some excellent details about the time and place: what they ate, what they wore, what their settlement was like, what the forest was like. The book is filled with his enthusiasm about a historical account that captures the imagination.

However, EBR will not be choosing FIONN as its top choice for the 2016 Blog Off and here’s why: the story could have been told without the fantasy elements.

FIONN is not a poorly written story. Its audience is history lovers who want to be immersed in a time and place via setting details and character behaviors. And FIONN does that admirably well. There are issues with a few things (I’ll chat about it below), but ultimately it’s a contest for fantasy, and unfortunately this novel falls short in that department. Yes, I know it’s only the first book in the series, and sure O’Sullivan hints at more; but it’s not a fantasy contest for a series, and when the first book contains so little fantasy as to be irrelevant to the story, I felt like I was tricked.

A fantasy story needs to be the fantasy. Fantasy makes the story. It just didn’t feel like it here. Sure Bodhmall’s druidic abilities help out with the defense of Ráth Bládhma. Sure Liath Luachra has to deal with the Tainted One. Sure there’s some ulterior motive why the war band is searching for Muirne.

But, and here’s the SPOILERS: we never learn why! This knowledge alone could have made the druid ‘magic’ matter to the story. Instead we have some nebulous concept that we can only hope will be explained in the sequel. Any answer would have explained why a war band would risk wasting lives. In THE LAST KINGDOM you learned pretty quickly that Vikings did not waste lives needlessly, they would live to fight another day–and yes I know these Irish guys weren’t Vikings, but the war band’s behavior isn’t explained, at least to my satisfaction. It felt like he spent all his world building energy on the mundane stuff–such as what they ate–and threw the fantastical stuff in as something to spice things up.

Ráth Bládhma is home to a handful of misfits simply trying to live a quiet, fulfilling life in the wilds of Ireland. More historical than fun.

If you’re reading the book for the historical details, this issue may not matter to you. However, it does to me because this unfinished world building leaves a big plot hole. Sure the tension about whether they’ll live or not is gritty and realistic, and the siege fight at the end is certainly knuckle-biting (this is not a spoiler, it’s the title! the whole plot is broadcast from the beginning and is pretty predictable, but history is like that), but I was left with too many questions that left me unsatisfied, and they were the result of the questions caused by the use of fantastical elements.

Ok, now that’s off my chest I want to talk about what O’Sullivan does right. The prose in particular is very readable and polished, painting a time and place with a pretty brush. He does frequently wax poetic at the expense of forward movement, but most readers who enjoy nice prose won’t mind. This novel isn’t about the plot, because it’s obvious from the start what the plot will be. Instead it’s about the journey to get there, the details that create it, and the people who populate it.

Bodhmall is the young woman who left her druid training early, so she could live life on her own terms, away from those who consider her a witch. Liath Luachra, the woman warrior (I assume that’s her on the cover) who wants to escape a former life of mercenary brutality, but is as the same time compelled to continue it. The PoV narrations by Liath Luachra and Bodhmall are subtly different, and help us understand what’s important to each woman by how they narrate their part of the story. The secondary characters include the three young sons of a former slave who idolize Liath Luachra and will risk their lives to be considered a warrior like her. There’s also Bodhmall’s ex-husband Fiacail whose womanizing ways keeps him from becoming the leader he’s born to be. There are others who are as well drawn (if sometimes a little ham-handed) and interesting, and they speak credible dialogue, but since the setting takes center stage their character arcs aren’t as strong as they could be.

Alas this book won’t appeal to as large an audience as it ought to; Brian O’Sulllivan’s dedication to pulling the reader into what feels like a foreign time and place is admirable and worth a look for that reason alone.

The author’s cool pronunciation guide can be found HERE.