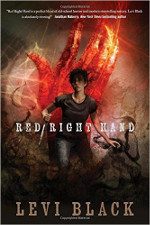 For the last few weeks I’ve been binge listening to the new Metallica album after finishing my last audio book. In amongst the new brilliance from this, one of my favorite bands, is a song called Dream No More that’s all about Cthulhu awakening from the deeps in which he resides. So, when I got this next book in the mail and checked out the Acknowledgements page that included a shout out to Lovecraft and the necessity of his Mythos to this book, it felt like I was already on board, strapped into my seat, and yanking on the whistle chain. Just couldn’t wait to grab it and go, go, go.

RED RIGHT HAND (Amazon) is Levi Black’s debut novel and is an engaging, quick read of magic, might, and a large helping of Lovecraftian madness.

Charlie Moore is a young woman with issues. Lots of issues. She’s on a bender after running away from her most recent attempt at trying to have a love interest. Something has obviously gone wrong, and she’s pulling herself through the front door of her apartment late at night, trying her best to just stay vertical, when a skinless dog steps out of the shadows, growling and slavering at her. Within seconds, a man in black breaks through the door behind her and chases the dog off into the night.

The man in black is Nyarlathotep, the Crawling Chaos, the Nightmare Man, and Charlie is a descendant of none other than H.P. Lovecraft. The premise is fairly simple. Mr. Thotep (I might be taking some liberties with my naming conventions here) is one of the few Chaos Gods of Lovecraft’s Mythos that has broken out of their prison and he isn’t taking very kindly to the notion that others of his kind will soon be coming to “share” this world. So, he’s taken it upon himself to destroy all of the others, but he needs an apprentice to help him. One from Lovecraft’s bloodline.

The book is fairly short and written like a thriller. I don’t think there were more than a handful of chapters longer than three pages. Black has a very accessible writing style that makes reading it very easy and quick, and Charlie’s voice makes her character come across strong and determined. She’s put in a horrible situation that just seems to get worse and worse. In each case, her decisions seem justified, and I can’t help but crow for Mr. Black and the fact that he’s given her such good motivations for each time she follows, and each time she defies, the man in black.

One of the big questions I had while reading it though, concerned the level of emotional removal that she must have from her life to be able to go through everything she does in this novel and not have it leave her a gibbering mass of sodden flesh. Regardless of what gets thrown at her, she’s able to muscle her way through it all, and by the end it all seemed like a bit too much. Typically, horror novels like this have a decent amount of humor peppered throughout it as a coping mechanism for the characters (and frequently the readers!), and there was some of that here, but it only started to come in quite late in the novel. The result is a reading experience that is very heavy without much release until it’s all over. And while the ending was definitely a point of some kind of finality, it really wasn’t any kind of ending. More like a turning point at what should have been the middle of a novel instead. Definitely leaves the story open for more though.

Anyhow, this was a quick, engaging read that had me jaw-dropping, eye-popping, and grimacing, it seemed, on every other page. The author goes all in for Lovecraft’s Mythos with a believable main character that is somehow able to overcome it all. A pretty good book, with good writing, a solid main character, and great promise for things to come.