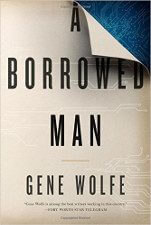 I was first introduced to the works of Gene Wolfe through the Books of the New Sun and the torturer Severian. Found the first of those on one of the random, wandering trips I took through the college library during my graduate school years. There were lots of those, and now it seems like they were longer ago than they actually are. I got through the first book in that series and then half of the second from what I remember. They were interesting enough, but didn’t really keep my interest, so I moved on to something I liked a little better. Funny enough, this book obviously included a library and I hadn’t read any Gene Wolfe in a while, so I was fairly excited to dive into it.

A BORROWED MAN (Amazon) is a stand-alone novel about a clone of a writer named E. A. Smithe that lives in a library and can get checked out by patrons. Kind of an interesting concept and definitely one that I hadn’t seen before. I couldn’t tell you how such a thing might make any kind of financial sense, but what the heck, this is science fiction, so why not?

The story starts with Mr. Smithe being consulted by a Miss Colette Coldbrook about a book that the original E. A. Smithe wrote. Her father held it in some kind of high regard, but he and her brother were recently killed. She’d like to get to the bottom of their deaths and believes that this book holds the key. After a quick back-and-forth, she decides to check Mr. Smithe out of the library for ten days to help her solve this mystery.

The writing here is pretty decent. If anything, it’s a little sparse. Kind of reminded me of the way that Mike Resnick writes: quick and accessible. At times the story suffered a little for clarity and contextual information. It follows Mr. Smithe as he first trails along with, then loses, and then proceeds without Ms. Coldbrook. While there are times when we get some of the character behind Mr. Smithe, involving his frustrations over who he is (an owned clone) and his limited abilities (he can never create another work of art, literary or otherwise), there isn’t a lot concerning his decisions regarding Ms. Coldbrook, or the lack thereof. There are times where it is intimated that he holds her in some kind of high regard and might be continuing her quest for that reason, but no solid motivation is ever really revealed for his decisions after the fair maiden mysteriously disappears.

Not a bad book, but if you're looking for a good example of what Gene Wolfe has written, A BORROWED MAN probably isn't the best place to start.

By following clues that he learns along the way, he comes step-by-step closer to figuring out what happened to Colette’s father and brother and why they are now dead. The revelation, while solidifying the idea that this is indeed science fiction, was somewhat dated. This seemed more a book that you’d find had been published thirty-some-odd years ago instead of anywhere near recently. In fact, it wouldn’t surprise me in the slightest to find that this was a trunk novel resurrected from the annals of Mr. Wolfe’s past and then shined up for a more recent publication. Granted, I have nothing to suggest that it actually is. It just kind of felt like that. You know?

Not a bad book, but if you’re looking for a good example of what Gene Wolfe has written, this probably isn’t the best place to start. Fairly entertaining but nothing to get excited about.