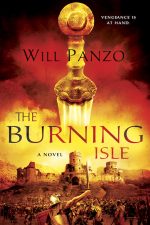 Last week I travelled to Savannah on a business trip and while packing my bag the night before I left I made sure to include the latest ARC I’ve received, THE BURNING ISLE (Amazon) by Will Panzo. My flights were supposed to be short jaunts and I didn’t suspect I’d have much free time to spend reading, but if I’ve learned anything in my 24 years of life it’s this: take a book with you wherever you go because you never know when you’ll be stuck wishing you had one. This maxim came in handy when Delta Airline’s servers went down, sending the whole system into chaos and I spent the next 24 hours in airport limbo. The good news is that I had THE BURNING ISLE on hand and an unexpected surplus of free time to read so that’s what I did. I wound up finishing all 417 pages before I boarded the flight to my final destination.

As bored as a day at the airport has the potential to be any halfway decent book would have been better than nothing at all but fortunately THE BURNING ISLE isn’t just halfway decent — it’s quite good. Like, early contender for debut fantasy of the year good and likely to become a new favorite amongst the grimdark fantasy crowd. Expect to see THE BURNING ISLE on the short list for the Gemmell Morningstar Awards next year.

A powerful and gripping debut grimdark fantasy novel, set in a world of criminals, pirates, assassins, and magic…

“A man has only three reasons for being anywhere: to right a wrong, to earn a coin, or because he is lost.”

Cassius is not lost…

The mage Cassius has just arrived on the island of Scipio. Five miles of slum on the edge of fifty miles of jungle, Scipio is a lawless haven for criminals, pirates, and exiles. The city is split in two, each half ruled by a corrupt feudal lord. Both of them answer to a mysterious general who lives deep in the jungle with his army, but they still constantly battle for power. If a man knows how to turn their discord to his advantage, he might also turn a profit…

But trained on the Isle of Twelve, Cassius is no ordinary spellcaster, and his goal is not simply money. This is a treacherous island where the native gods are restless and anything can happen…

The book opens with a quote from Bill Hicks about Westerns and avenging cowboy heroes and despite THE BURNING ISLE fitting firmly into the fantasy genre I can definitely see how Westerns may have inspired it. This influence is most evident in Panzo’s protagonist, Cassius. The story is told from a third person limited point of view that works exceedingly well to maintain the aura of mystery Panzo drapes across Cassius. Despite the fact that Cassius is the only POV character, readers know little of his history, motivations, plans, and identity for the majority of the novel. His past is gradually unlocked via flashbacks every couple of chapters, though the astute may be able to piece together the clues quicker than I was able.

Having grown somewhat bored of typical revenge tales I found this method of character development engrossing and highly effective. It’s obvious from the start that Cassius is on a mission of sorts but we don’t fully grasp the implications of it until it nears completion.

Scipio is a blood-drenched hellhole where life is cheap but a fragile balance has been struck — a balance that the arrival of Cassius is quick to upset. Panzo paints all its various neighborhoods in vivid colors, establishing Scipio as one of my favorite fantasy locales, though you won’t catch me wishing to visit it as some would like to vacation in Narnia. What’s not to love about a lawless island city governed by criminal factions at the edge of an empire, surrounded by a jungle haunted by “savages”? Not only is Scipio fully realized but readers catch glimpses of a much, much wider world yet to be displayed through the flashbacks and snatches of conversations. Not only do I suspect that the wider setting has breadth of scope but also unplumbed depth. For every piece of the world Panzo shows I don’t doubt he’s plotted a great bit more.

THE BURNING ISLE isn't just halfway decent, it's quite good. Kind of like early contender for debut-fantasy-of-the-year good. Read this guy's stuff. Now.

THE BURNING ISLE had me hooked from the interaction between our protagonist and the barkeep on the very first page. The barkeep’s comparison between Cassius and the gold coin he’s been handed does well to set the tone for all that’s to come. Cassius wants to accomplish great things but along the way he learns that a lot of blood must be spilled to become a legend. The question becomes whether he can flense away what he perceives as weakness in order to affect the change he has envisioned for Scipio. What and who is Cassius willing to sacrifice to further his agenda? There’s a level of nuance to the devious Cassius that gives me deeper appreciation for his arc the further I reflect on the story.

And best of all he’s a wizard! When’s the last time you read a grimdark novel where the protagonist was a legit wizard? And Cassius isn’t just any wizard either, he trained on the Isle of Twelve which is like Hogwarts meets the U.S. Army School of the Americas. To put it simply Cassius isn’t just a killer, he’s in the business of regime change.

Panzo has crafted an awesome magic system for THE BURNING ISLE. Not since MISTBORN have I liked a magic system as much as Panzo’s. I don’t want that to give you the wrong impression, however, as the magic in THE BURNING ISLE feels much more organic and slightly less video gamey. Which is not to say that the magic isn’t totally un-video gamey because I can definitely see the collection of gems and codices making for great RPG elements. There are various types of magic in the world: blood magic, nature magic, etc., but the Antiochi empire has become so powerful by stealing magic from these other cultures, disassembling it, distilling it into its simplest forms, and encoding the secrets into runes.

Antiochi magic practitioners use gauntlets inset with gems to harness the magic. Each gem has a different spell and the codices help spellcasters learn the runes and their effects. The spells aren’t necessarily as powerful as they would be in their natural form but the simplicity of using the runes make them much more practical and reliable. It’s a little like Pokémon with the rune collecting honestly. Duels between spellcasters can be highly explosive games of high speed chess and getting to experience Antiochi magic during urban warfare at the end of the book was exhilarating.

I do have a few small criticisms of THE BURNING ISLE. As fulfilling as I found Cassius’s character arc I can’t say I found many of the other characters very memorable. I wish that Panzo had dedicated the same degree of attention to developing the supporting characters (especially the crime bosses). The idea of a mysterious general in the jungle definitely gave off an Apocalypse Now/Colonel Kurtz vibe, but he left me slightly underwhelmed in the end. The seeming gullibility of everyone to continuously believe Cassius almost stretched credulity and I would have liked to have seen Cassius pitted against a truly worthy opponent. My final complaint is that Cassius seems to fall or get knocked unconscious far too often for him to not suffer from some pretty serious and permanent brain damage. Cassius falling unconscious is an understandable side effect of his condition but combined with the number of times he’s knocked out it seems a bit much. None of these issues proved more than minor irritations.

I’m desperately hoping that this book sells well enough to land Panzo a full series deal with ACE because I need more. I’m not worried though, I’m confident the book will be recognized and celebrated for what it is. THE BURNING ISLE was an absolute pleasure to be stuck in an airport with, I eagerly anticipate the further adventures of Cassius.