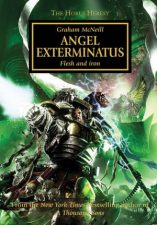 I’ve been on somewhat of a Warhammer 40,000 reading binge of late. Or, more accurately, a Warhammer 30,000 reading binge as each of the five titles I’ve devoured in the past month has been set in the Horus Heresy event series. I’m a Warhammer 40k fanboy (I have the Imperial Aquila tattooed on my chest), but I’d taken a few year hiatus from the universe. Now I’m back with a vengeance and there is a surplus of new material to gorge on. The most recent Horus Heresy novel I’ve read, ANGEL EXTERMINATUS by Graham McNeill (Amazon), is the 23rd book in a series that is currently on its 37th installment. The books are penned by multiple authors, and all of the books are connected by larger events and characters but not all are necessarily sequential. It’s a truly impressive collaboration. It’s been ten years since Black Library began publishing the Horus Heresy and a lot has happened since the opening trilogy. ANGEL EXTERMINATUS is perhaps most closely tied to the fifth book in the series, FULGRIM (Amazon), also written by Graham McNeill. ANGEL EXTERMINATUS is also a prequel of sorts to several of Graham McNeill’s books set 10,000 years after the Horus Heresy two of my favorite 40k books: STORM OF IRON (Amazon), DEAD SKY BLACK SUN (Amazon); one of my least favorite: CHAPTER’S DUE (Amazon). In any case, ANGEL EXTERMINATUS is not the place for newbies to start.

Here’s the synopsis lifted from Amazon…

Perturabo – master of siegecraft, and the executioner of Olympia. Long has he lived in the shadow of his more favoured primarch brothers, frustrated by the mundane and ignominious duties which regularly fall to his Legion. When Fulgrim offers him the chance to lead an expedition in search of ancient and destructive xenos weaponry, the Iron Warriors and the Emperor’s Children unite and venture deep into the heart of the great star maelstrom that haunts Perturabo’s dreams. Pursued by vengeful survivors from Isstvan V and the revenants of a dead eldar world, they must work quickly if they are to unleash the devastating power of the Angel Exterminatus!

ANGEL EXTERMINATUS was the last book I bought from Black Library before I took my hiatus but I never got around to reading it. I’d love to go back in time and kick past-Nick for dropping the ball because it’s a fantastic addition to the Horus Heresy. Of all the traitor legions the Iron Warriors have always had a special place in my heart (thanks solely to McNeill’s STORM OF IRON and DEAD SKY BLACK SUN. Despite that I never considered Perturabo, Primarch of the Iron Warriors, to be especially nuanced. He’s a siege specialist, a blunt instrument for hammering enemies into submission. Or so I thought. This book proved me way wrong.

The best thing about the Horus Heresy series has been the depth of characterization given to seemingly one dimensional ultra villains. Unexpectedly I’ve come to see the likes of Horus Lupercal, Fulgrim, Lorgar Aurelian, Alpharius, and Magnus for the tragic figures they are and empathize with them. That’s not small feat given the depths of depravity they indulge in and the horror these characters inflict on the universe. With ANGEL EXTERMINATUS its Perturabo’s turn for some subtlety and McNeill nails it. It turns out that the Lord of Iron isn’t simply a destroyer. He’s a creator, a builder of far more than forts and siege works. He’s got a mind to rival the best and brightest Primarchs but is constantly underestimated by his father, the Emperor, and his brothers. Perturabo and the Iron Warriors aren’t blunt objects for bludgeoning enemies into compliance but that is exactly how they have been utilized and it chafes.

It becomes even easier to sympathize with Perturabo when he is juxtaposed with Fulgrim, his brother and fellow conspirator in Horus’s civil war against the Imperium. Fulgrim was once one of the few brothers with which Perturbabo shared a thread of camaraderie, someone who understood Perturabo’s own dedication to perfection — but that was long ago. Those who read FULGRIM will know that Fulgrim and his legion, the Emperor’s Children, have fallen far in their worship of the Chaos god Slaanesh. Perturabo is disgusted by the devotion of the Emperor’s Children to the pursuits of the flesh and their degrading discipline. When Fulgrim approaches Perturabo with a quest to obtain alien super weapons, Perturabo fully expects he is being deceived in some manner but the prospect is tantalizing enough to secure the support of the Iron Warriors.

Complaints aside there is a ton to love about ANGEL EXTERMINATUS that brings us closer to the end of the Horus Heresy. One of the good ones.

One of my few complaints is how linear the quest is. Fulgrim meets up with Perturabo at Point A. Perturabo agrees to join the hunt for these alien super weapons. There’s a brief diversion when the fleets of the Emperor’s Children and Iron Warriors encounter and engage a lone loyalist ship that is attempting to prevent the traitors from gaining access to these weapons that could allegedly put a swift end to the war. The Emperor’s Children and Iron Warriors arrive at Point B and discover what they sought. The end. Of course there’s betrayal and revelation along the way, punctuated with plenty of ceramite-rending, skull-crushing action. The final battle is another complaint of mine. The alien enemy that the Emperor’s Children and Iron Warriors square off against make for much less interesting combatants than the loyalist space marines.

Complaints aside there is a ton to love about ANGEL EXTERMINATUS from McNeill’s portrayal of Perturabo to the continued downward spiral of Fulgrim and his legion. The ragtag band of loyalist space marine survivors of the Dropsite Massacre on Isstvan V were a nice addition. It was good to see the loyalists finally give back as good as they got and the lone Raven Guard space marine Nykona Sharrowkyn sold me on a legion I’ve never much cared for. It was cool to see the return of characters from FULGRIM and even cooler to read the origins of Iron Warriors from STORM OF IRON and DEAD SKY BLACK SUN. It’s clear from the writing that McNeill enjoys writing the Iron Warriors and I hope that Perturabo will feature in another novel before the Horus Heresy draws to a close.