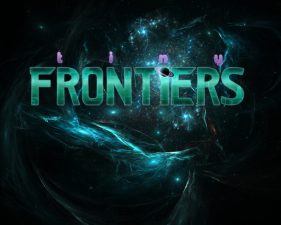 Game design is fascinating to me. Board games, video games, and especially roleplaying games. As it happens, one of our resident reviewers here at EBR, Alan Bahr, is also a game designer. He was the designer for the Schlock Mercenary RPG, PLANET MERCENARY, which was absurdly successful on Kickstarter. And now, his most recent game, TINY FRONTIERS, is on Kickstarter.

I figured I’d ask Alan to give all of us some insight on his company, Gallant Knight Games, and on his game, TINY FRONTIERS. So. Here we go.

Elitist Book Reviews: Alan, thank you for taking time away from running your Kickstarter (and that day-job thing) to answer a few questions. Let’s start by letting you introduce yourself properly to the readers, and telling us what your current Kickstarter, TINY FRONTIERS, is all about.

Gallant Knight Games: I’m Alan Bahr, I’m the founder of Gallant Knight Games, a company that is self-publishing our first RPG on Kickstarter right now. Tiny Frontiers is a science-fiction roleplaying game designed to cut to the core of what makes RPGs fun, and provide a great framework for imagination in a small, minimalist ruleset. Tiny Frontiers is licensed and based on the Tiny Dungeon ruleset.

EBR: Where does this love for RPGs come from? What makes you wake up in the morning (or night) and say, “I need to make this into a game for people to play”?

GKG: I love seeing folks have fun, I love the idea of inhabiting new characters. I suspect is similar to why authors write: telling a story in a large way, but with active participation.

As for why games I make get made, it’s just the story I want to enable people to tell. This time it was science fiction. Next time it might be fantasy, urban fantasy, cyberpunk, noir, or wuxia. It varies.

EBR: You did the game design for the Schlock Mercenary RPG, PLANET MERCENARY. What was it like playing in someone’s sandbox, and how does it compare/differ from what you are doing with TINY FRONTIERS?

GKG: It was…different? So for Planet Mercenary, I had to build the ruleset to match an existing style of story, which was challenging, but very rewarding to get right (which I think we did). It was a lot of fun to explore the secret corners of Howard Talyer’s setting (which he let me do with much grace and aplomb), and to also contribute a little bit to it (some of the new aliens/weapons are contributed by myself, or players in playtesting).

With Tiny Frontiers, it was a bit different, because instead of building rules to a world–but having pretty much carte blanche there–I had to build rules to existing rules. So it’s still someone else’s sandbox, just from the otherside of the RPG coin (rules vs. settings).

EBR: Why did you choose the contributors you did for this RPG, and what was the process like for gathering pitch ideas from them for the various micro-settings in the book?

As for gathering all the submissions and making sure no one stepped on anyone’s toes, I didn’t really have to worry. Everyone was pretty unique in their setting pitch. The hardest part was me keeping it all straight (that took a bit to figure out a good process for). But everyone we’re working with has been top notch and excellent.

EBR: In an age of video games, TV, and movies, why should people play RPGs?

One: They have no limitations. You can play a video game RPG like Fallout 4, but if the game tells you that you can’t jump this fence, then you can’t. No way around it. (Yes, I know about modding, but not all games can be modded). RPGs are only as limited as the creativity and imagination all the participants show, which leads to my second point.

Two: Participants. You can have a half-dozen friends sit down and socially hang out for three hours or more, while playing imagination, having fun, and feeling cool. It’s the only direct participation medium on the market, where everyone who consumes it is directly involved in making it happen.

EBR: What were the games/media most influential on TINY FRONTIERS?

GKG: Ya know, Star Trek, He-man, basically any science fiction story type has an influence on at least one micro-setting in the book. Rules-wise, Tiny Dungeon of course.

EBR: Let’s talk about RPG design as a whole. Most people have zero idea how this whole thing even works (myself included). What is your process for it? For example, how do you know whether to use a current system vs an original one when beginning?

GKG: Part of it is the need. Tiny Frontiers was licensed because I was so impressed with Tiny Dungeon, I wanted to work with it. For Planet Mercenary, there was no system on the market that 100% met our needs, so we decided that I’d write one from the ground up.

I have a very specific flow for creating a new game system, having done it a few times now. Step one: I outline the base dice mechanics and any unique “setting” related mechanics I’m required to have. Step two: I play a baseline game with a group. Just a standard adventure designed to evoke the cool setting rules, and the game. Step three is revising the rules, and redoing step two ad nauseum. Then I attempt to write the full thing down, make any changes required, and get it to an editor/beta readers for feedback, and we go from there.

EBR: What are the draws/detractors from doing an original IP vs playing in someones world?

GKG: Every RPG has constrictions; page count, art, setting, word count, etc. Playing in someone else’s world is just a basic restriction, and I don’t really think it’s that much different on a core level. You have to write to a goal, it’s just an extra goal.

EBR: If someone wants to get into game design, are there any resources they can access to set them on the right path?

GKG: Talk to creators and publishers. Most of them are happy to talk about the process, and ensure you know the most. That’s always your best resource. There’s a lot of RPG design forums and reddits out there, so you can always scour those too.

EBR: Brutal honesty time: How hard is it to do this game design thing? In the publishing world, it’s often held that your first million or so words are going to suck. Is there an analog in the game design business?

GKG: Brutal honesty? You’re going to fail. Your first design will suck. Probably your second and third. But you gotta keep doing it, because once the mistakes are in the past, you get good. And you can start to really do it right.

I have 13 unpublished dice systems I wrote, before my 14th was licensed for Planet Mercenary. That 14th system went through 3 major overhauls (completely gutting it and starting over), and over 200 minor revisions to core rules. That’s just the writing. If you’re self-publishing your own RPG, it gets even harder. I spend about 6 hours a week playing RPGs to keep myself in the mood and focused on the market. I spend about 25 to 30 a week writing RPGs.

EBR: With TINY FRONTIERS having hit its finding goal (CONGRATS!!!!), this means you now have 2 successful projects in a row. I assume you are always thinking of your next project? Any hints you can give as to what it may be?

GKG: Gallant Knight Games as four licensed fiction series due for RPGs. Those will be our next projects. So if you like RPGs based on books, in a multitude of genres, there’s a lot coming. Aside from that, I have my own words and games coming down the pipeline. My favorite genres are noir, wuxia, and spy thrillers, so there might eventually be something around that.

EBR: Again, thank you for taking time out of your busy schedule. Any last words?

More importantly, Tiny Frontiers is only $20 to back, so if you’re interested in trying new RPGs, it’s a good deal. Comes with everything you need to play, and it’s easy and kid-friendly.

TINY FRONTIERS only has a week left until the Kickstarter closes. It has already hit it’s funding goal, and has hit a few stretch-goals as well. Stretch goals include micro-settings from amazing authors like Dan Wells, Marie Brennan, some of the top RPG writers…and even ME (Steve Diamond)!