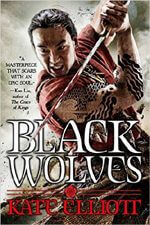 BLACK WOLVES starts with Kellas, one of the king’s Black Wolves, an elite military unit designed to hunt down the remaining demons and enforce the king’s law. Dannarah is the king’s daughter who yearns for a life other than the one where she will be married off to a foreign prince. We are introduced early on to a world rich with details, politics, religion, and a varied landscape. All within the first 90 pages.

And then all of the sudden Kate Elliot propels us 40+ years into the future.  Yes, I howled in frustration. I was just getting to know these characters and now they’re…. old? Turns out, that’s exactly when the real story begins.

I suppose you could call those first 90 pages a prologue, even if it’s ridiculously long (was she channeling Mr. Jordan?). But it sets an important groundwork that would otherwise be hard to establish with the background of the main characters, what’s important to them, why they feel so compelled to right what’s been changed in those forty years. Elliot spends the entire book world building, think SHO-GUN (Amazon) meets David Eddings, an epic mashup of cultures, food, clothing, religion, and mores. And there’s even giant flying eagles.

So basically the story is that this country named The Hundred used to be policed by demons, but they became corrupt and were ruining everyone’s lives. Along comes this king (Dannarah’s father) who invades, sets himself up as king, and kills enough of the demons that the remaining ones go into hiding and peace is established. Since then there’s been a succession of kings; Atari (Dannarah’s brother) was murdered in his prime, leaving a self-indulgent son Jehosh as the new king. And here we are in the present day and Jehosh has spent so much time battling foreigners that he’s neglected his political city and now his wife, heirs, and trusted administration are laying the groundwork for tyrannical control of the country. It gets so bad people are wondering if maybe leaving the demons in charge would have been better.

Enter Kellas who leaves retirement to help king Jehosh get control back of his own kingship. And Marshal Dennarah who is now one of the reeves who fly in eagle harness, and is struggling to understand not only how everything went wrong, but also how to fix it. Then we’re introduced to Sarai, a young woman who bears the shame of her mother’s indiscretions, and as a result is married off to an outsider in an attempt for her family access to palace contacts. Her husband is playboy Gilaras, also the progeny of traitorous parents

Not that I’m trying to make a comparison to Lois McMaster Bujold’s PALADIN OF SOULS (amazon) –which is one of my favorite books of all time, Bujold is one heck of a writer–but I’m thinking along the lines of twisting up the genre a bit. Here we have an epic fantasy and it’s the old guys who are the main characters; in PALADIN the main character is a dowager queen who’s let out to pasture but finds a new adventure of her own. BLACK WOLVES takes that concept and makes it just as relevant, because our characters are the same people we met in the first 90 pages, but forty years later are tempered by hard-fought experience and physical limitations. Makes for a different dynamic than usual and I really liked this change of scenery.

And then all of the sudden we're 40+ years into the future. I was just getting to know the characters! Turns out, that's exactly when the real story begins.

My favorite character was Sarai. She’s a member of a closed-off religious community who rarely marry with outsiders and even separate the sexes within their community. She must marry a man she doesn’t know, but she prefers it to a life of non-status among her mother’s own family. In some ways she’s a contradiction to me: she stands firm in worshipping only her people’s god and maintaining some of those traditions while easily casting off others. She’s smart, clever, but naive. I also liked Kellas, especially his older self, who still feels loyal to the king despite everything that’s happened. Gilaras’s story is less fleshed out than the others, but I would have liked to see him more in action. Lifka is the foreign-born girl who inadvertantly becomes “jessed” to an eagle who’s recently killed its former reeve. This event changes her life but also threatens the lives of her family, and she’s nothing if not loyal to those who’ve raised her, even if she isn’t their biological child. Dannarah is the straight-talking former princess who will do whatever it takes to protect the reeves and The Hundred.

The characters are what carry this story along, keeping you reading for more, because despite the fascinating world building, the middle of the novel gets bogged down by politics. The novel isn’t perfectly laid out, there’s a lot of blather in-between the crucial plot points. And there’s simply too much back story to unravel the mysteries of who’s allied with who, the mystery behind the demons and their magic, and the Ri Amarah and their magic that by the end I was still left with unanswered questions. I’ll just have to hope they’re answered in the sequels.

There are a frustrating number of flashbacks interspersed throughout the novel. Most of the time it felt like it only assuaged curiosity about what happened in that 44 year gap Elliot threw at us (ug, what’s the point to an almost 90 page “background story” to the novel when we’re only going to have flashbacks later?). Some flashbacks were necessary to clarify stories, but mostly they re-hash stuff that’s already been explained or that I figured out on my own–ok, I guess I’ll concede that they do reveal stuff, but did it have to be in another flashback? Another problem is that I often lost track of characters, there were simply too many names and people to remember (this was also a problem I had in WoT, so maybe it’s just me).

The end is full of brutal, twisty revelations that are a long time coming. Characters make decisions that are true to them, yet at the same time hard to watch as those you’ve come to admire are led by their own prejudices. It’s a long book, clocking in at over 800 pages, so it took me a while. Some readers will love having a big cast of characters, the messy politics, the detailed world building. And other readers will yawn. So, yes, this is a book in the epic fantasy category, and there are still two more books to go, so don’t say I didn’t warn you. But I also know some of you live for this sort of thing, and it’s worth the time for its creativity, despite its flaws.