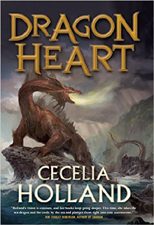 Jeon’s sister Tirza has always been a strange creature. She understands those around her, but when she tries to respond, everything comes out sounding like animals noises. Her family still loves her, but her life is full of frustration due to her inability to communicate. DRAGON HEART opens with Jeon bringing Tirza home after banishment to a faraway convent. On the ship ride home they are mysteriously attacked and events lead to Tirza finding herself in a secluded cove that belongs to a sea dragon.

While Tirza cannot speak with her fellow humans, she discovers that she can communicate with the dragon, who demands stories in exchange for him not eating her. Their relationship is a strange one, and despite her escape it’s easy to believe that isn’t the last we’ll see of the dragon.

The majority of the story is set at Castle Ocean, where Tirza and Jeon’s widowed mother is forced to marry a brother of the current Emperor, the marriage making him king of Castle Ocean. The nasty Archduke brings with him his two scheming sons and the machinations begin as Jeon and his family resist the takeover by outsiders.

This book was a disappointment. Holland is no newcomer so it was a surprise to find a disjointed, confusing, and incomplete novel. I’m not sure a sequel could fix this mess.

DRAGON HEART opens with a ship ride home and leads to an attack... and a sea dragon. Not particularly bad, but nothing close to amazing either.

The story starts out promisingly enough. Joen and Tirza are likable characters, and their siblings are good people despite their privileged upbringing. Holland’s presentation of the setting was lovely and convincing, from the sandy and rocky shores to the castle built from the caves on the cliffs above the town. Her lovely prose makes it easy to visualize where Jeon and Tirza live. The setting is easily the best part of the book. One wishes she could have translated it to the rest of the novel.

DRAGON HEART is told from a rotational PoV through all the major characters, so we get to see the story from the viewpoint of about a dozen people. Since it’s a short book, this made it hard to really get to know any of the characters, as we couldn’t see deeply into their personality and motivations. Frequent PoV shifts made the protagonists boring and the antagonists almost comical in their stereotype. For instance, the nasty Archduke bit his finance’s hand; his son Oto would go around telling everyone that they had to obey him. Another obvious question was: Tirza could have made up a sign language with her family in order to communicate, even something rudimentary, but there was nothing. The characterization was inconsistent with the subtlety of the worldbuilding.

Since we don’t really understand the characters we don’t really understand why they do the things they do, and the result is a storyline with a confusing plot. I can’t tell you much without revealing spoilers, but by the end everything is turned upside-down and ends abruptly. We hardly see the dragon of which the book is titled. So many questions were left unanswered. I was left scratching my head. I won’t be passing this book along to my dragon-loving daughter.