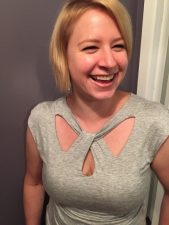 Subterranean Press–a specialty press run by the amazing Bill Schafer–is easily my favorite publisher. Everything they do has an extra layer of quality to it. The paper. The art. The binding. When you get a book from SubPress, you automatically know it is worth the premium price you paid. In an age where ebooks seem to be holding us collectors hostage, SubPress comes out and reminds us that all is well. Recently I was fortunate enough to conduct a quick interview with Yanni Kuznia, who is the Director of Production over at Subterranean Press. I’ve always wanted to know more of what went on behind the curtain over at SubPress, and I figured our readers here at EBR would be equally curious. So here we go.

Elitist Book Reviews: Yanni, tell us about yourself, and about Subterranean Press. This is your moment to indulge in a little bragging, both for yourself and the publisher.

Yanni Kuznia: Subterranean Press is a small press that specializes in signed, limited editions of genre fiction. We strive to make our books readable pieces of art.

I found my forever home at Subterranean Press in 2007. I started out doing work for Bill Schafer and Subterranean Press as a freelance proofreader and narrator. About six months later, Bill made me an offer for a full time job I couldn’t refuse. I didn’t know working in publishing, and specifically for SubPress, was my dream job, but here I am, still in love with my career and thankful that Bill took a chance on somebody with no formal training in publishing.

EBR: Most people have very little idea as to the work that goes into making a publisher like Sub Press successful, and the huge amount of work involved. Give us a “day in the life” of Yanni.

YK: A Day in the Life typically involves a lot of email, followed by conversations that often start with “Has XX finished proofing YY?” or “Did GG turn in the cover art for HH?”

I usually start my day by reading all of the email that has come in since 4 PM the night before that I didn’t immediately respond to at the time. At least one conversation will devolve into a Nerf battle. I spend at least a little time reading every day, either for art directing, editing, or to find new voices. I check in with the production staff on the statuses of their various projects, track down signature sheets, call authors to discuss corrections, pop over to the warehouse to find out what is shipping that week, arrange travel to various conventions.

EBR: Subterranean Press is one of the few places these days that excels at finding and publishing short fiction. Why is there such a focus on short fiction at Sub Press, and how have you managed to keep the quality so high for so long?

YK: When I started at SubPress, Bill described our goal for original work thus “We want to be the place people bring projects that aren’t right for New York.” That continues to be one of our core principles, and I think one of the keys to keeping the quality high.

EBR: Looking back over your time at Sub Press, you must have been able to work on some amazing projects. Is there a particular project you worked on that still stands out in your mind, and why?

The first project is A Fantasy Medley. Not long after starting at SubPress, Bill decided to toss me in the deep end of publishing, by having me curate and produce my own small anthology. I was ridiculously lucky to have my first four choices, Robin Hobb, Kelley Armstrong, C. E. Murphy, and Kate Elliott, say they would love to write short fiction pieces for me. I was even luckier that they were all fully invested in the anthology and as excited as I was to produce it.

The second project that I still can’t believe I worked on is our edition of Steven Erikson’s Deadhouse Gates. Bill basically tossed the reins for this project to me, and said “Don’t screw up.” Like that, I was art directing without a net. J. K. Drummond and I spent about a year working on the art, going back and forth with revisions and refinements. I screamed like a teenage girl at a Beatles concert when the finished copies showed up at the office, it was that gorgeous! Working on Deadhouse was doubly rewarding, as Bill picked up the limited rights to the first few books of the Malazan Book of the Fallen on my recommendation. That he trusted my judgment so much is quite humbling and flattering.

EBR: Let’s talk about you boss at SubPress, Bill Schafer. It seems like he flies under most people’s radars, but this guy is absolutely tremendous. What makes him so good at his job, and what’s it like working with him?

YK: Bill would joke that he’s making up for his mis-spent youth by collecting all the authors he read growing up. While it’s true, that he publishes many of the authors of his youth, he also makes a point of reading several new writers every year, something that has made him aware of writers like Patrick Rothfuss, Joe Hill, Paolo Bacigalupi, Seanan MacGuire/Mira Grant, Scott Lynch, Kage Baker, and Joe Abercrombie before they gained more widespread attention. He has an eye for crowd-pleasers as well as critically-acclaimed writers.

Working with Bill is a cross between working with my spouse and my brother. We’ve been working together so closely for so long that we finish each other’s sandwiches. We can talk pretty heatedly with each other, but the minute one of us says “Enough.” the other backs off and we get the conversation back on track. He’s ruined me for working anywhere else, honestly. The freedom Bill has given me to learn my job, fail and improve, and the trust he places in me to maintain SubPress’ highest standards, I don’t think I would find anywhere else. Working at SubPress has turned into the dream job I didn’t know I wanted until I had it.

EBR: What do you see as the greatest challenge facing Sub Press now and going forward into the future?

YK: I think the greatest challenge facing SubPress now and in the future is the same that other genre publishers and small presses face: staying relevant. We are continually looking for old and new fiction that people want to read and collect, and everyone at SubPress is part of that search. We all read different genres and if something stands out, we sing its praises. We joke that we are “playing with live ammo”, and it’s true. Bill and I have found more than one title or author because somebody at SubPress brought it to our attention.

EBR: Yanni, thank you so much for time! Before you head out, are there any last words you want to leave with us?

I’d like to thank Yanni for taking the time to answer my questions. As a parting shot, Yanni has a new anthology she has edited over at SubPress called A FANTASY MEDLEY 3. Go grab a copy at SubPress before they sell out! Here’s your link: