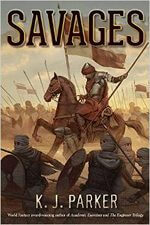 K.J. Parker has been one of my favorite authors for quite some time now. Her books, in my opinion, are brilliant fun and have oodles of engaging characters put into absolutely awful predicaments. Even though she overwhelmingly shies away from all things “magical,” there’s plenty within the “fantasy palette” developed by each book that I feel completely satiated at the end of each reading. She makes me laugh, and as I’ve repeatedly found, making a reader laugh can cover a multitude of sins (if there are any). If you’re up on your game in regards to her publications, you might also have noticed that Ms. Parker is NOT A MS. Completely took me by surprise as, when speaking of authors from across the pond, I’ve tended to like the works of more female authors than their more masculine counterparts (with a few exceptions). Never thought I’d see the day honestly. But still, Tom Holt writes the books the same way whether he uses that pseudonym or not. So I’m still happy.

SAVAGES (Subterranean Press), is the first book that’s been released by the author in quite some time. I’d been going through withdrawals, honestly. Apparently, she’d he’d been working on a concept novel that didn’t entirely work out and so instead, that story got put into this book. The successful version of the concept novel he wrote can now (partially) be found as the serial novel: THE TWO OF SWORDS. Six of the eight portions of that book have been released thus far. Meaning, after our long wait, there’s not one but TWO novels for us to sink our teeth into. Praise.

SAVAGES is a book about war. No ifs, ands, or buts about it. Check out the front cover. War? Yup. And yet, it isn’t, because it’s really about the people in the war just like every other K.J. Parker book. It’s about how those people are affected by the war. How they in turn affect it. In some cases, how they direct it and turn it to their own uses. It’s about nations and history and the mirage of power. Political in the best of ways. Genre-bending in many. And intensely personal throughout. Next to the Engineer trilogy (which will always hold a special place in my inner-engineer heart), I think this has been my favorite book from her him. (Sorry, I’m trying. Really, I am…)

The story begins with a man whose name we never learn. He’s awoken from sleep by a rival neighbor who’s decided to kill the man’s family and then throw him down a well (not only drowning him but killing him permanently, from more of a religious standpoint). He escapes the well, but his family has died, and in the process he’s become broken. A new man. One that has forgotten his life on a farm, his family, his people, and run away to the lands of the empire. He takes on a new name, Raffen, but life has a way of eventually catching up to him.

Calojan (supposedly said with a short “o” sound, though I just couldn’t do it) is a military genius, a small, frail man with a weak chin and large nose, is second in command of the empire, with his trusty friend the emperor, Sechimer. Together they have saved the empire from imminent downfall after the poor leadership of the previous emperor (a decidedly ruthless and SAVAGE man), and are at odds with the Sashan, a neighboring empire, that they wish to completely eradicate.

Aimeric de Peguilhan (this guy got a last name–he’s special) is a college student that is called home early, to the empire, after a tragedy has occurred in the family. He’s to take over the family business of making weapons for Calojan’s war, despite the fact that Aimeric is very much a pacifist and wants nothing more than to stay in school. Alas, life frequently turns us in directions other than those of our heart’s desire.

Then there’s Chauzida, the newly raised prince of the Aram Cosseilhatz, that is trying to mourn the passing of his father, the chief, without thinking or talking directly about him (tradition) and learn as much as he can from his uncle Joiauz, the regent, whilst his people are aiding Calojan in his war against the Sashan. He only wants to be a good king, but there’s simply all this policy that seems to be getting in the way.

The book is, in its paces, largely concerned with battles between Calojan and his enemies, as they progressively change throughout the book. Regardless of exactly whom is at the receiving end of his gaze o’ war, there are always many SAVAGES to be drawn through the ringer by the empire. Whether speaking of the SAVAGE Cosseilhatz, or the Selbst that happen to live just over the way, or even the much more SAVAGE Goida that live further away yet. There always seems to be another pack of SAVAGES around for them to squander, squash, or squib.

A thoroughly enjoyable novel. Horrific, intelligent, and uproarious in turns, K.J. Parker's SAVAGES kept me up into the small hours of the night.

I also noticed this time, more than any other (probably due to listening to the audio interview with Tom Holt I linked above) how many massively bad things tend to happen because of very small causes. The wrenches in the works. The final straw upon the proverbial camel’s back. The flutter of the butter-things’s wings. It is life, in a nutshell. In all its hilarity. A bit of realism in a genre that too often misses the important details of things and how it all gets quite complicated quite quickly.

A thoroughly enjoyable novel. Horrific, intelligent, and uproarious in turns, K.J. Parker’s SAVAGES kept me up into the small hours of the night, absorbing me into everything that it seemed she he (Dang, I almost made it) set out to accomplish. The end, though open to further installments, was satisfying and enjoyable. I can’t wait to have the next round in my hands.