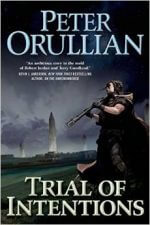 In THE UNREMEMERED: Author’s Definitive Edition (EBR Review), Peter Orullian delivered a classical fantasy novel that hearkened to the stories of Tolkien, Brooks, and more. Heroic adventures, dramatic conflicts, and nuanced storytelling continue to be the hallmarks of Orullian’s writing. And he delivers all the joys of fantasy you could want.

Orullian’s biggest crime and greatest triumph is the delightful abuse and magnificent use of emotion. TRIAL OF INTENTIONS will take you from joy, to sorrow, to triumph, to the utter abyss of defeat. Orullian has put the fantasy back in epic fantasy, and the new life his creation breathes into a genre that grows staler by the day, is a welcome wind of relief to any reader.

The book is pretty massive. It could double as a self defense weapon. I’m not sure if that was intentional or not. The cover art looks half finished, like the artist just phoned it in with a first draft and some colors. Also, the image doesn’t fit the book. I mean, after reading the book, I realized the cover character is an astronomer. He’s holding a telescope. Not a flute. Woulda missed that otherwise.

In my previous review, I praised Orullian’s magic system based on music. He really ups the game here, taking an interesting, unique magic system and creating an awesome underlying principle for it (which he calls Resonance), but then takes it one step further. He leverages that idea of Resonance into several different magic systems. All his magic systems work under an overarching methodology, and his world and writing benefit from it. But along with the magic, he includes science. Philosophy, astronomy, and more are all as important to the main characters, the plot, and the word as is the magic. I’ve never seen an epic fantasy where sciences were on an equal footing with magic. I’m not a scientist, but the science Orullian references seems accurate. Even if it weren’t, you could tell he’s researched the terms and descriptions–this is especially noticeable around the astronomy sections.

In almost all epic fantasy, there’s a war. And the main characters are rushing to either prevent the war (through violence) or be in the war (with violence). In TRIAL OF INTENTIONS, one of Orullian’s protagonists’ whole goal is to prevent war by using knowledge, discourse, and a distinct lack of violence.

I can’t recall the last epic fantasy where a main character spent a good portion of the book doing research, investigating, and debating to undo the violence and war that was sweeping towards him. There’s a lot of empathy in the approach the character brings, and the philosophical musings on life, hope, and the state of world really add to the characterization. You realize that Orullian has poured a lot of time, effort, and emotion into ensuring that this character solves and approaches his problems, and the world’s problems, from a human standpoint.

Now, I’m not saying there’s no action or violence. Plenty of it. Other protagonists and antagonists in the book get into a healthy amount of battles. But it’s all done for the sake of plot, and the sake of necessity, which was a refreshing read.

Orullian has the rare gift of an artist, and TRIAL OF INTENTIONS deserves to fall into the annals of epic fantasy history.

At the risk of spoilers, Orullian reaches into the bag of tropes (great evil, sealed away, blah blah blah), and deftly turns them on their head. Evil is present, but the evil is not where the idea of fantasy directs you to look. We get to look into the Bourne and see what’s there. We get to see what being sealed from the world has wrought upon that portion of the world and what it’s left behind. There’s a lot of tragedy hidden inside this trope of evil, and it took me two read-throughs to really grasp a lot of what was being delivered here.

The antagonist of the story however, isn’t the sealed evil, it’s delivered in the persona of Roth Staned. An antagonist willing to do anything to stop the evil, turning to brutal, effective, and dark methods. The questions of morality and honor to one’s ideals are forced starkly against the complexness of Staned, and the story benefits greatly for them.

Orullian continues this trope-turning with our protagonist. At the end of the first book, we discover some secrets about Tahn that change the way we view him. Throughout this book, Orullian continues to use our expectations against us, playing off our viewpoint, and then turning that same view against us, in surprising, and refreshing reveals.

In my review of Orullian’s first book I said that “Frankly, to me, this is a work of art on par with the masters of the genre, Jordan, Rothfuss, Tolkien, and more.” A bold statement, but luckily, Orullian’s exceptional talent has risen up to defend my words. It’s rare to see a second book this much better than the first. Orullian is only getting better. Deeper writing. More subtle pacing and plot. Innovations in the story he’s telling, in a way that makes a reread of the first book, like reading a whole new book. Orullian has the rare gift of an artist, and this book deserves to fall into the annals of epic fantasy history.