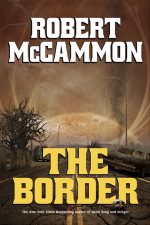 Robert McCammon has never let me down. When I sit down with one of his novels, I can kick back and enjoy it because I know it’s going to be solid. THE BORDER (Amazon) was no different. I loved every page.

If you’ve followed McCammon’s career, or if you’ve just recently discovered him, you’ll notice that he stepped away from traditional Horror for a while. Recently he’s been writing the incredible Matthew Corbett series, which has some Horror elements, but they probably aren’t considered pure Horror novels. THE BORDER is Horror, pure and simple. For this reason it has been on people’s radars since announced. McCammon? Doing traditional Horror? Take all my money!

THE BORDER–published by the always excellent Subterranean Press–is best described as elements of SWAN SONG (EBR Review) mixed with the worst case scenario of alien invasion movies like Edge of Tomorrow and McCammon’s earlier novel, STINGER (Amazon). The general idea here is that Earth has been invaded. Twice. Those two alien races are fighting each other tooth-and-nail for control over an imaginary line in space. It so happens that Earth is right on that border. Hence the title of the novel. A young boy named Ethan is an impossible survivor and may hold the only glimmer of hope for the few humans still surviving in a world that has collapsed utterly.

Let’s start with the aliens! Two different types, called the Gorgons and the Cyphers respectively. I don’t want to say too much about them so their first descriptions have the full effect when you turn the pages of the novel. I loved them. McCammon doesn’t get too involved in their cultures, and I’m glad. I loved the mystery and the alien way they acted and thought (yes, pun intended). Likewise, I loved the way McCammon treated their impact on the world itself. Earth is so polluted that the toxicity of the rain, earth, and air has turned some people and animals into Gray Men. I can’t wait for readers to see McCammon’s descriptions of these monstrosities. I was alternately repulsed and impressed.

Robert McCammon has never let me down. With his novels, I can kick back and simply enjoy it because I know it’ll be solid. THE BORDER was no different.

The human characters are written deftly. The feelings of hopelessness and despair are so palpable that at times I would find myself getting caught in the emotions evoked by the cast. The roller coaster of hope to sadness and back was incredible. Ethan is one of McCammon’s finest characters ever created, and I was blown away by how real everyone’s reactions to him were.

I’ve been dying to talk to someone about this book. Don’t get me wrong, I love McCammon’s Matthew Corbett novels. But THE BORDER is something special. It has that old-school McCammon Horror vibe to it, but even more refined and focused. If there is any complaint to have, it’s that the novel’s 450 pages were not near enough. It was absurdly easy for me to sit down and fly through 150 pages at a time, and then be devastated that I had to go to bed because of that pesky day job I have. The ending of the novel, while awesome, could have easily taken up another 100 pages and I would have loved it just as much as I love the current ending.

THE BORDER is McCammon at his finest. Horror, action, science fiction and post-apocalyptic goodness all rolled up into a single, tightly paced novel. This is the reason I read and write Horror. If you are going to read one Horror novel this year, make it THE BORDER.

Or get it direct from Subterranean Press

And a free short audio clip from the publisher HERE.