“Don’t judge a book by its cover” is a tired, old saying that should be put to rest in regards to actual books. It’s a fine sentiment when applied to people but taken literally it’s damaging to the practice of publishing. Call me superficial but I believe it’s only natural to judge a book by its cover. I also believe you should factor in title and plot synopsis (if you get that far). Browsing the aisles of a book store or scrolling through Amazon there are countless titles vying for attention. Great covers get lost in the midst of this sensory overload, it’s true, but bad covers are even more likely to be skimmed over. If your book reaches out to someone through all the clutter it better catch their eye for all the right reasons.

Self-published books carry a stigma for many reasons; but before a critic can even dismiss them for horrible grammar, typos, thin plots, thinner characters, wonky POV, or any number of errors the critic first  has to first be enticed to even pick up and open the book. It’s all about first impressions and this is one area where self-published authors have a notoriously hard time. I get requests in my inbox to read and review self-published books frequently.

I don’t know how most of these authors acquired my email and I don’t much appreciate the spam, but that’s a topic for another post.

The point is that I scroll down, ignoring the content of the request, and look at the book cover — and then I delete it. I always end up deleting the request. I’ve never not deleted the request. The covers have all been stereotypically bad. I’ve only ever reviewed one self-published novel. Is it possible that I’ve deleted the next great American novel because of my prejudice? Of course it is, but I won’t lose any sleep over it.

I’m sorry if all this is sounding harsh but it’s the truth. Contributing to Elitist Book Reviews and SF Signal I get to read more books than I could ever afford as a regular consumer. My To Read Pile is daunting and it never gets smaller. I can’t read all of the books that I want to read (first world problems) so I’m not going to volunteer to review a book with a cover that makes me want to club baby seals. There are some great critics out there that aren’t so superficial but if you want your self-published book to have the best chance of success (not just with critics but with consumers as well) I suggest you heed the following advice.

I spoke with my buddy/co-worker Shawn King of STK Kreations. Shawn is the resident graphic design guru at Ragnarok Publications and he has a real eye for professional detail. He provided help writing this post. You can view his portfolio here.

You’ve written your book. You’ve edited your book. You’re eager to publish it and share it with the world. But first you’ve got to get a cover. The only problem is that you don’t have the money for a professional artist. But that’s okay, you’ve got a digital camera and your cousin Earl made the invitations to your last birthday party on Microsoft Paint. How hard can it be to cobble together a decent looking cover?

Don’t do it. For the love of all that is holy do not make your own cover unless you have prior graphic design experience. If you decide to wing it and make your own book cover without a clue what you’re doing it will wind up embarrassing you on a BuzzFeed list. Shoddy photo manipulations and crayon scans are not going to attract readers. You don’t have the money to pay someone to do your cover? Find it.

Instead of wasting money on one of those sites that holds gift card giveaways for self-published books in return for a small fee, spend it on something worthwhile. If you truly believe in your book then consider it an investment. It’s important that you look at the covers of successful books in your genre. Get a feel for what sells. I’m not suggesting you blatantly rip off someone else’s work but take notes. Christian McGrath is one of the most popular cover artists in the genre market (seriously, that guy alone is responsible for half the urban fantasy covers it seems) and I’m guessing he’s not cheap. Still, there are more affordable artists out there capable of producing similar yet original art.

You don’t have to go and pay someone thousands of dollars for the art and design. There are wonderful sites such as DeviantArt full of talented and capable artists eager for paid work. Do some research, know what you want, and search out that style of artist and inquiry about commissions. If they are out of your price range thank them and move on.

Do not ask them to work for you solely in return for exposure. They are professionals and deserve to be treated as such. You are not Stephen King and making your cover won’t earn them tons of fame and commissions.

Maybe you aren’t an illustrator but you do have some graphic design skills and hiring someone to draw a sick cover image broke your bank. If that’s the case be sure to design around the illustration in order to pull the package together as a cohesive whole. Keep it free of clutter, you don’t want to detract from the awesome artwork you just paid hard-earned money for. Make sure the fonts you choose work with the art and don’t use more than 2 or 3 fonts. If possible alter or customize the base font so that it’s less likely to be repeated by a competitor.

Maybe you really can’t afford an illustrator but found a graphic designer that has reasonable rates. That’s perfectly fine. Good graphic design can be just as effective at conveying ideas and themes as any drawing or painting. Some of Shawn’s best cover work for Ragnarok Publications has been purely graphic design. A lot of readers prefer this style of cover because they want to visualize everything in their head as they read it without the influence of an illustrator’s interpretation.

Finally, find someone whose tastes you admire but isn’t afraid to hurt your feelings. The more people you can find who fit this category the better. Show them all what you’ve got. Your grandma’s opinion does not matter. Being coddled at this point is going to do you more harm than good. You need brutally honest feedback. It needs to be brutal because the readers and critics will only be worse (I promise you this). If the cover needs work then it’s back to the drawing board with you. Don’t get your feelings hurt, solve the problems and try again.

Of the books I was assigned to read for The Great Self-Published Fantasy Blog-off one lacked a cover, another had a bad cover, and the third had a relatively-simple-yet-attractive cover. Guess which one I’m still reading. I won’t use this post to call out any cases of bad self-published cover art (you can Google search images if you need examples) but I will give credit where credit is due.

Of the books I was assigned THE THIEF WHO PULLED ON TROUBLE’S BRAIDS by Michael McClung is easily the best and will enjoy my support in the next stage of the competition. It made a good first impression because of the cover (and title and then synopsis). The cover isn’t a fantasy masterpiece classic but it is clean and atmospheric and makes good use of both the art and the typography. It brought to mind the Tower and Knife books by Mazarkis Williams and the Low Town novels by Daniel Polansky. It looks marketable. 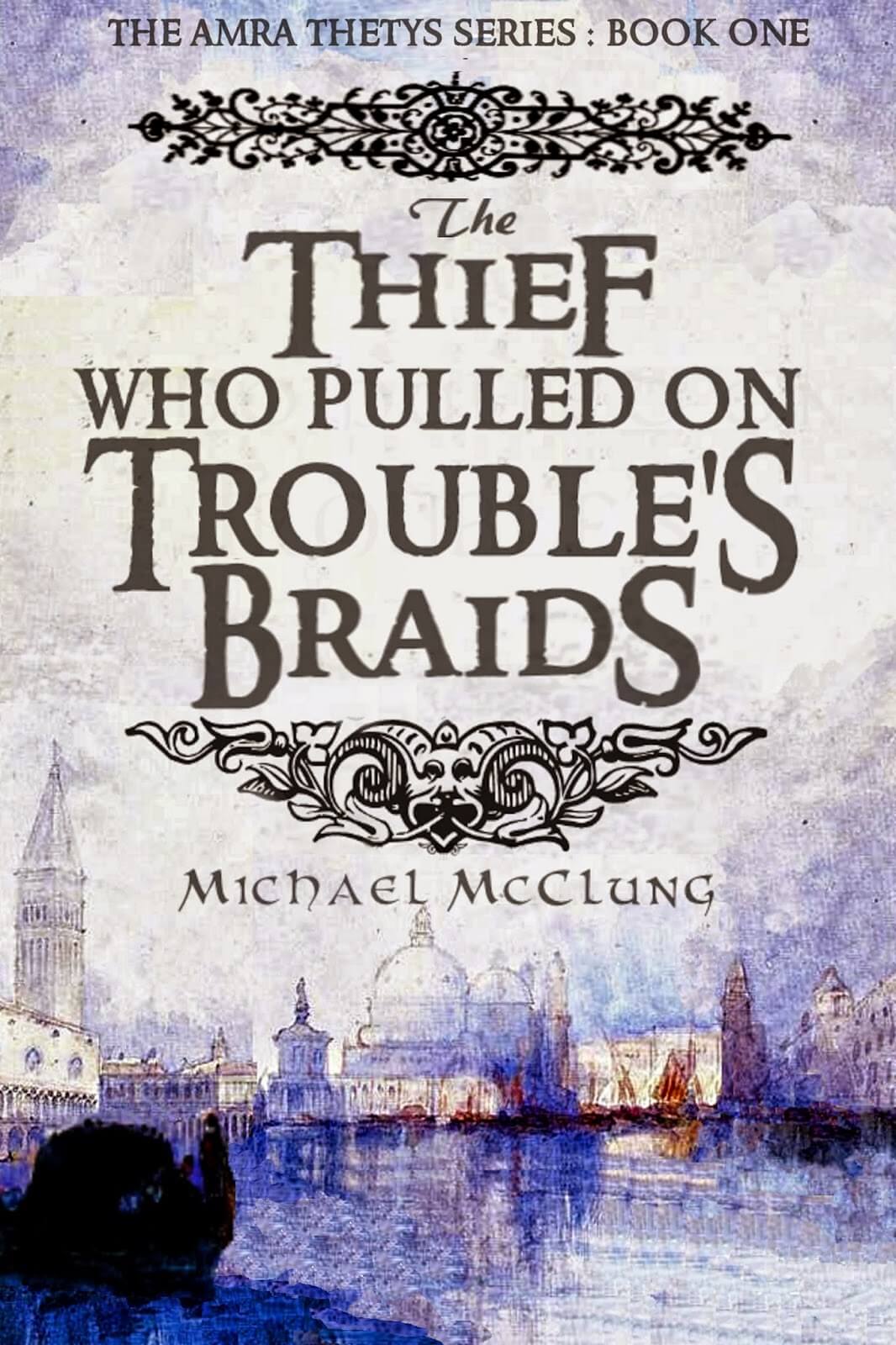 Already McClung has distanced himself from the self-published competition and associated himself with traditionally published professionals. There was no guarantee that this would read any better than the others but the cover did demonstrate an assuring professionalism. If McClung was invested enough in his writing to put this much effort into the cover then there was a real chance it was worth my time.

That didn’t mean that McClung was going to get a break. I went into this novel with much higher expectations for the writing than I had for the other titles. Still, the way was open and THE THIEF WHO PULLED ON TROUBLE’S BRAIDS got its foot in the door. And that’s all it took.

I genuinely hope that all of this didn’t come across too harsh or condescending. As an aspiring author I respect the self-published community a great deal — at least you’ve finished writing a book, that’s more than I can say for myself. I spent my afternoon writing this so that maybe it will help explain why us nasty critics generally avoid self-published titles and encourage you to take pride in your book cover and do it right.