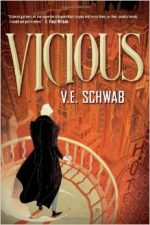 Sometimes it’s easy to get into the rhythm of reviewing and forget that there’s more going on in conjunction with the books I cycle through. Read, ponder, review, repeat — the mantra of the book reviewer. Occasionally though I like to shake things up and go looking for more, be it details about the author, story inspiration, sequels, interviews, bonus dealings — stuff like that. I happened to do a little homework on this one because for some reason or another the curiosity bug bit me once I’d read it. After very little time, I came across an article about this particular book that made me hesitate and think on my opinions. The article I found talked about a movie deal, and it had a name attached to it: Ridley Scott.

VICIOUS (Amazon) is V.E. Schwab’s first adult book to be published after her three middle-grades and four YA novels. There were aspects of this book that reminded me of one written for younger audiences, so it didn’t really surprise me to find the author’s publication history.

Victor Vale and Eli Cardale are pre-med students at Lockland University. They’re friends and roommates, and Victor has an intense interest in all the things Eli does. There is something about him that just doesn’t fit, and Victor finds himself chasing after it at every bend in their path. Eli, although ostensibly at school to learn to be a doctor, has something a little more untraditional in mind. He has a serious bent toward learning about EOs, or those that are ExtraOrdinary. Superheroes. Well, those with super powers anyhow, as not all those with special powers can necessarily be considered heroes.

Eli begins a school project about them (a point that stretched the boundary of believability for me) and Victor quickly picks up on it. Eli’s research posits that a near-death experience can lead to one becoming an EO and gaining powers that are otherwise ExtraOrdinary. So, the two of them fairly quickly collude to help each other through the process of dying and coming back to life in hopes that they each can gain some power. Unfortunately, things don’t exactly go to plan.

The story itself is a good one. It’s a superheroes origin story of sorts, but it’s one that completely discards the heroes. This being because the process, at least as far as the examples in the book go, seems to remove an EO’s empathy. They all end up kind of like serial killers, but without the burning desire to off anybody. Well, most of them, anyhow. Victor and Eli are both pretty set on ending each other…

VICIOUS is a superheroes origin story of sorts, but it's one that completely discards the heroes and didn't do anything to make it all that super either.

It’s obvious from the get-go that Schwab has been writing for a while. She writes quite well and brings us into the story and the characters lives with a fair amount of ease. There was something missing for me though that made it feel as if the motivations of the characters, Victor and Eli especially, were not quite enough to… uh… motivate them. Initially, after the realization that they’d need to die to test their EO theory, and then afterward, when they were hating on each other enough to kill each other. I didn’t get sold on the fact that the reasons behind these motivations were sufficient to produce the actions of the characters.

A second sticking point was the structure of the book itself. It’s organized such that the current timeline is a three day period of time that takes up a relatively small portion of the pages. At a guess, I’d say it’s somewhere on the order of 25%. So, a fourth of the book concerns the story that’s happening, and that leaves 75% of the book that concerns the story leading up to the current timeline. Thus, the large majority of the book was a big old flashback, and that made it kind of difficult for me to get into it.

The larger issue though was that the story largely avoids emphasizing the really unique part of the whole situation: superheroes without empathy. This simple fact is set aside for the overriding lust for revenge that the characters have for one another. Yes, they notice that something is different, but they don’t deal with it in the slightest. Perhaps this is a setup for future books. This one was about revenge, and future sequels will show the characters dealing with the fallout of a superhero’s world without empathy. If so, I look forward to reading those stories. If not, then I think the novelty of this idea will go untapped.

The idea for the novel was great, the story itself just didn’t wow me enough for it to rise above the pack. I’ll be interested though in seeing what Ridley Scott’s company can make of the idea, where their version of the story will go, and what issues they’ll tackle along the way. Something to watch for.