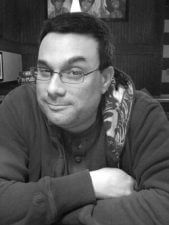 Stephen Blackmoore is a pulp writer of little to no renown who once thought lighting things on fire was one of the best things a kid could do with his time. Until he discovered that eyebrows don’t grow back very quickly.

He is the author of the urban fantasy novels CITY OF THE LOST, DEAD THINGS and the upcoming BROKEN SOULS. His short stories and poetry have appeared in Plots With Guns, Needle, Spinetingler, Thrilling Detective, Shots, Demolition, Clean Sheets , Flashing In The Gutters and a couple of anthologies with authors far better than he is.

I loved CITY OF THE LOST and just knew I had to get an interview with Stephen for Elitist Book Reviews. This is that interview.

Stephen Blackmoore: First off, thank you for having me. I like being had. Wait. No. That came out wrong. ANYWAY. So, ten words or less? Huh. How about *counts on fingers* four? “They are f***ing awesome.”

EBR: I was only a couple pages into DEAD THINGS before I went ahead and ordered BROKEN SOULS. First impressions are important in life but doubly so in reading. With that in mind how do you go about writing a catchy intro?

SB: I try really, really hard to not be boring. I think the trick there is to force the reader to ask questions that demand answers from the get go. I don’t know that I necessarily pull that off all the time, but I try.

There’s this book, GUN MONKEYS by Victor Gischler. I find myself thinking back to its opening sentence a lot. It’s stuck with me since I first read it years ago.

“I turned the Chrysler onto the Florida Turnpike with Rollo Kramer’s headless body in the trunk, and all the time I’m thinking I should’ve put some plastic down.”

That’s a sentence that demands you keep reading. Who’s talking? How many times has he done this sort of thing to know to put plastic down in the trunk and to regret the fact that he didn’t? Who’s Rollo Kramer? Why’s his headless body in the trunk? Where’s his head? The only way to find out the answers is to keep going.

EBR: Necromancy is black magic and black magic is traditionally used for evil or selfish purposes. It seems that a lot of urban fantasy stories shy away from the black aspect but in DEAD THINGS you really embrace it – why is that?

SB: I wrote DEAD THINGS and BROKEN SOULS as noir novels first and urban fantasies second. I see it less about the magic in the books being dark and more about the characters’ choices and consequences being dark. Eric Carter’s not a nice person. He makes really shitty decisions that lead to terrible things happening.

Pull out the magic and he’s still going to make shitty decisions that lead to terrible things happening. Also the idea of “black” and “white” magic has never made much sense to me in fantasy novels. That feels overly simplistic. Most things don’t easily fall into one good or bad, so why would magic?

I wanted to play with the idea that magic is just a thing, like electricity or guns. Something that it’s up to the person wielding it to determine how it’s used. If you run somebody down in a car, is the car evil? No. It’s the guy behind the wheel. And even then, maybe he had a really good reason for it.

EBR: While we’re on the topic of magic I’d like to say that DEAD THINGS and BROKEN SOULS have a really solid, logical magic system that meshes well with the mythos you’ve built. How do you strike a balance between building on lore and tradition and creating your own legend?

SB: More than anything else I want my books to not be boring. And I try to do that by finding new spins on things. If there’s some existing mythology I can draw on I will, but I try to find something new I can do with it.

Because of that I wanted to keep the rules of the magic simple. That keeps it flexible and gives me an opportunity to find new ways to play with it that support the story I’m telling rather than get in the way of it. I’ve thrown out a lot of things that I thought were cool because they didn’t fit.

EBR: Eric Carter. I probably shouldn’t like the protagonist of DEAD THINGS as much as I do and yet… and yet he’s a compelling lead. He’s not the best role model, but I can’t help but admire his problem solving methods. How do you write Eric? Do you draw from your own experiences?

SB: God, I hope he’s not a role model for anybody. The man’s an asshole. I wrote Carter to be broken and flawed. I hope I’m not nearly as screwed up as he is.

The inspiration for Carter actually comes from other noir characters. Leonard from MEMENTO. Hammett’s The Continental Op. People who operate in shades of gray rather than black and white. Characters who aren’t sympathetic so much as compelling. People you might not want to be friends with but who you can’t help but wonder what they’ll do next.

EBR: Eric has a nasty bag of tricks up his sleeve and BROKEN SOULS sees him growing even stronger in his magic (at a cost of course). How do you keep Eric a badass without making him overpowered?

SB: I don’t really think of it in terms of power, though it is something I worry about. I don’t want to create a character who can do anything. That’s boring. I don’t want to write it and nobody would want to read it. Weaknesses and flaws make characters interesting. I want to know what their pain points are, where their blind spots are. I want to know what can be used against them.

You take a character like Superman, for example, and he can do anything and nothing can hurt him except kryptonite. Only that’s not true. His weakness isn’t some glowing green rock, it’s the people he doesn’t want to see hurt. If you want to f*** with Superman you kill Lois Lane. So when I’m thinking about how Carter is going to change across the books and how I can keep him from being boring, that’s the sort of thing I’m thinking about. What are his pain points? What is he afraid to lose?

EBR: Over the course of two books Eric’s life has become ungodly complicated (heh, see what I did there?) and his relationships are tenuous at best. I can imagine this series continuing on for quite some time. Do you have a set length to the series in mind or (sales permitting) do you plan to keep this going as long as possible?

SB: I plan on keeping Eric around as long as I find him interesting. So far I have at least three more books in mind after the next one, HUNGRY GHOSTS, comes out next year, though I don’t have a contract for them.

EBR: Eric is pretty hardcore. In the event of an urban fantasy cage match what character from another series do you think would best give him a run for his money?

SB: I think Carter’s the kind of guy who would rather set fire to the building the cage match is in than actually get in there and fight. But that doesn’t really answer the question.

I’d say Charlie Huston’s vampire detective Joe Pitt. The first book is ALREADY DEAD and if you haven’t read the series you really should. It’s very dark and very messed up. Pitt’s a bastard.

EBR: I found DEAD THINGS based off M.L. Brennan’s recommendation (for any who are unaware Brennan’s American Vampire series is a blast). Now I’d like to ask you – what is my next favorite book(s) going to be? Give me some recommendations please!

SB: Here’s two I think need to get a lot more attention. KOKO TAKES A HOLIDAY by Kieran Shea – Completely off the hook space opera that reads like Hunter S Thompson and Elmore Leonard dropped acid together and beat the crap out of Heinlein with tire irons.

SLINGERS by Matt Wallace – First in a series about a future death sport that takes place in orbit over a wormhole. It opens with a guy being dumped out of the wormhole 30,000 feet over Hanoi to splat on the pavement and just gets more batshit from there.

EBR: Can you tell us what you have in store for the next book in the Eric Carter series? Anyone who’s read BROKEN SOULS might have a clue as to the direction the series is taking but can you possibly give us a clearer picture?

SB: In DEAD THINGS and BROKEN SOULS Carter’s largely had to react to things being thrown at him. In the next book, HUNGRY GHOSTS, he tries to take more control of the situation. Only it doesn’t go as well as he’s planned.

EBR: Thank you so much for taking the time to answer all these questions and thank you also for writing DEAD THINGS! Do you have any final words for our readers?

SB: Be excellent to each other.

This interview was conducted for Elitist Book Reviews by Nickolas.