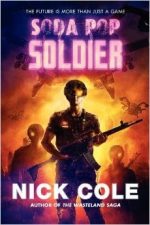 As an Advertising/Public Relations major and a lifelong gamer, Nick Cole’s SODA POP SOLDIER (Amazon) immediately appealed to me. The premise of the novel revolves around professional matches being waged online over choice advertising real estate in the real world. Told from the first-person perspective by a character known only by the gamer tag PerfectQuestion, SODA POP SOLDIER is pitched as Call of Duty meets Diablo. The gaming segments of the novel deliver on the action packed promise of the book’s description. Unfortunately the sections of the book that take place in the real world lack the same punch.

I appreciate the respect for video games that Nick Cole brought to the writing of this novel. You can always tell when someone writes about games and has no real understanding of them. WarWorld, the Call of Duty‘esque game at the forefront of the novel comes across as the ultimate First Person Shooter, with a level of environmental destruction to marvel at. The battles are so large and dynamic that you can’t help but wish to play them. One of my favorite parts of the novel happens early on, when PerfectQuestion is tasked with obtaining a special bioweapon… a crossover marketing event to create hype for the reboot of James Cameron’s Aliens. It’s a cool homage to the movie considered responsible for giving the world “space marines.” WarWorld is the highlight of SODA POP SOLDIER and there’s plenty of it to go around as PerfectQuestion’s employer ColaCorp engages in a fighting retreat across multiple massive maps.

ColaCorp’s losing streak has consequences for PerfectQuestion in real life and that’s where the second game comes into play. PerfectQuestion needs rent money and it’s looking more and more likely that he’ll lose his pro-gamer status and be fired from ColaCorp. Desperate to make ends meet he buys into an illegal open source Diablo‘esque Black game. In these games depravity reigns supreme. Part snuff, part pornography, and part MMORPG, PerfectQuestion (playing as the samurai Wu) endures the horrors of Wastehavens in hopes of cash rewards. The premise is pretty twisted and for the most part Cole manages to pull it off, though the world is so interactive that it would have been far more believable as a Virtual Reality game. The game tests PerfectQuestion/Wu’s resolve and values. Our protagonist’s early relations with other players in the Black are chilling. Unfortunately it gets less creepy as the game goes on, becoming more and more like a traditional RPG — albeit with massive cash prizes. Both of these games are unique and interesting in their own ways, and both have effects on PerfectQuestion’s life in the real world.

And it’s the real world that lessened by enjoyment of SODA POP SOLDIER. I failed to invest in PerfectQuestion as a character from early on. He’s a pro-gamer that drinks scotch, smokes cigarettes, has an apartment he can’t afford and a girlfriend problems. There’s not much more to him than that, not even a real legal name. In WarWorld he’s a competent soldier and in the Black he’s a noble samurai but in the real world he’s… a place holder. I believe that his crumbling relationship is meant to humanize him, meant to allow readers to sympathize with his plight, but it never does. We never get to see any of the good in his love interest. We don’t see much of her at all, except for a bit at the beginning where she dismisses how he makes a living before shooting off for a private party. Then PerfectQuestion spends the rest of the novel missing her and readers can only wonder why.

It's worth noting that SODA POP SOLDIER isn't a bad novel. There are a lot of really cool ideas peppered throughout the book.

The real world conflicts caused by the PerfectQuestion’s actions in-game are difficult to take seriously. This part of the plot is necessary because it ties everything together, giving weight to what would otherwise be fun escapism. This part of the plot is also the most over-the-top. And that’s fine. Neal Stephenson’s SNOW CRASH is nothing if not over-the-top, but in a more cohesive manner. The villain of SODA POP SOLDIER is especially ridiculous, and while that might be the point it makes the high stakes seem less staggering. There’s some vague “master plan” that PerfectQuestion throws a kink into but I couldn’t help but wonder how it would lead to world domination.

It’s worth noting that SODA POP SOLDIER isn’t a bad novel. There are a lot of really cool ideas peppered throughout the book. I found the ideal of an illegal Role Playing Game full of drugs, sex, snuff, and cash prizes to be highly appealing, and Cole’s portrayal of a First Person Shooter had me reaching for my XBox controller. The WarWorld and Black segments are incentive enough for any gamer to pick up SODA POP SOLDIER.